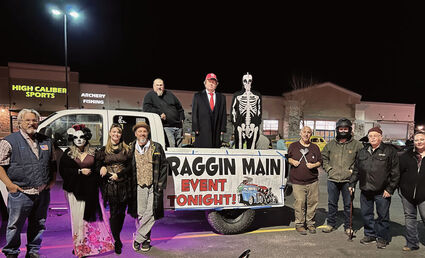 What a Halloween! Four days of spooky celebrations calls for a proper "thank you" to all the organizations and groups that put on a great time for the kids of Sidney. Halloween started out with the annual Halloween Custom Contest at Reynolds Market followed by a community trunk or treat. The costume contest was once again a hit boasting 85 entrees. This was the second year a trunk or treat had been incorporated into the Reynolds Market festivities and it was a great time! Businesses including McDonalds, Eagle Foundation, Butler Ag, Triple B Services, Sidney Police Department, High Plains Vet Clinic, Lions Club, Oneok, Tri-County Implement, Richland County Sheriff's Office, PSC Insulation, The Rush, Lower Yellowstone ABATE, Farm Bureau, and the Sidney Ambulance joined forces with the Sidney Jaycees and the Sidney Montana Dragging Main Clubs to host a fun night of cool cars and lots of candy.

The Sidney Montana Dragging Main Club spearheaded by Jessica and Josh Viall, Don Viall, Charley Buehner, Shania Hoadley and Jason Shrader, organized a Free-will barbecue at Friday's Trunk or Treat. The proceeds from the barbecue were matched by the Sidney Jaycees and used to purchase candy for Extended Care, The Lodge and Crestwood Inn.

Moving on to day two of Halloween, Sidney Assembly of God hit it out of the park with what has grown to be a Halloween Carnival. Sidney Assembly of God's celebration included a Trunk or Treat, bouncy castles, a petting zoo, food vendors, a bake sale and chili feed, face painting and live music. Kelly Burke and Stacy Fischer of The Women of the Moose also continued their annual Halloween carnival with nearly 200 children visiting to play the games and win prizes. The Sidney Elks Lodge also continued with their club's "Trail of Treats". Trinity Lutheran Church also held a Trunk or Treat and the Drug Free Communities program through Richland County Health Department hosted a "Sidney Scream Youth Scavenger Hunt."

Finally, Halloween hit Sidney and trick or treaters filled the streets and the hallways of The Lodge, Crestwood Inn and Extended Care. Thank you to everyone who worked hard putting on a great Halloween!