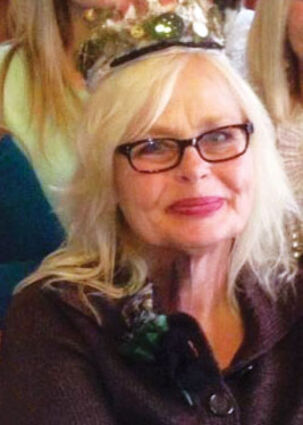 Memorial services for Patti Wheeling, 69, Sidney are at 11 a.m., Thursday, Nov. 10, 2022, at Pella Lutheran Church, Sidney, MT with Pastor Tim Tharp officiating. Fulkerson-Stevenson Funeral Home, Sidney, MT is caring for the family. If you do send flowers, they need to be silk arrangements or non-flowering green plants due to flower allergies in the family or in lieu of flowers memorials may be made to, Christmas Coalition or the Foundation for Community Care.

On Oct. 6, 1953, Patricia "Patti" Gayle Wilkinson, a beautiful, big blue-eyed baby was born in Greybull, WY to William and Joyce (Collingwood) Wilkinson. Her dad was in Korea, serving in the Air Force, so he didn't get to see his baby "Trish" until she was a couple months old.

When Patti was 3 years old, they landed in Sidney, MT, which would end up being her forever home. When she was 5 years old, she washed dishes at their family restaurant, The Dutch Mill. She would have to stand on empty pop crates to reach to the bottom of the sink. This was the beginning of the strong work ethic that she developed in life. Patti was the oldest of six kids and was in charge of them often. Every Saturday she was given money to take all five of her siblings to the matinee. She loved telling them scary stories about haunted schoolhouses and she even told them that the basement was haunted, so that they wouldn't come downstairs where her bedroom was. She had to drive her siblings to school in the family Studebaker. Brother Mike would always criticize her lack of skill with the stick shift. Patti always excelled in school and had a passion for learning, even though she was diagnosed with dyslexia. After high school, she went to college to pursue her teaching degree. She met her children's father, and they moved back to Sidney to start a family. They had four extraordinary children together: Jesse, Sarah, Julie, and Kari LaFountain. After their marriage ended, she went back to Eastern Montana College, in Billings, to finish her degree.

Patti was a devoted teacher and made an impact on many students and fellow teachers during her 32 years with Sidney Public Schools. She taught a few different elementary grades, including 5th and 2nd, and finished her career with 3rd grade. It was common to see students, both present and former, run up to her with a hug and want to talk with her when she would be out and about. Patti's kids would often hear that she was a favorite teacher to so many.

Patti's zest for life made many occasions memorable for her children. Whether it be celebrating birthdays and holidays, taking trips to Medora, ordering in Corner Pocket pizza and getting to invite friends over for a sleepover, or even just working at The Depot, she made life feel special. This is something her kids cherish, and they will carry on the tradition of celebrating all of life's moments, as she would. Patti was also known, within her large family, for bringing the merriment to the many craft and pool parties she loved to attend. No one will be able to play the role of "dead man" quite like she did. Whenever she knew there would be a get together with her kids and grandkids, she would eagerly start baking and planning menus weeks in advance. Spending time with her family was her greatest joy in life and making food was a big part of how she showed her affection to everyone.

Patti married Mike Wheeling in 1994 and a few months later their first grandchild was born. Patti was determined to create memories with her grandchildren, so she and Mike attended as many of their events as possible. For the next 27 years she enjoyed wrestling, football, dance, gymnastics, school events, water park adventures, graduations, and her beloved trips to Papa's Pumpkin Patch. Patti loved dogs and liked taking long walks with Sadie Sue. You could see the two of them walking around town and enjoying the day. She recently enjoyed going to NDSU football games. She didn't care much about the game itself but loved the tailgating and the atmosphere of the dome. She would cheer right along with the students.

Here is to a wonderful lady who made wonderful memories.