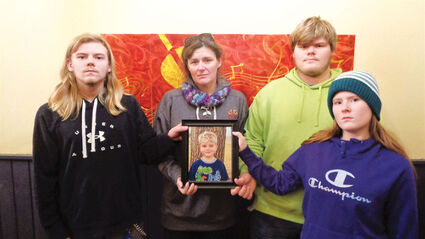 Pictured from left, brother Nicholas, mother Autumn, brother Michael, and sister Rebecca Jorstad all stand with a picture of their youngest family member, Taylem Berry, who was abducted by his biological father, Raymond Berry, at the beginning of October 2022. (Photo by Jaymi Mozeak)

(Updated 11-30-22) On Tuesday, November 29, Raymond and Taylem Berry were located in Mariposa County, California, thanks to a tip received by the Sidney Police Department. Raymond Berry was taken into custody for an arrest warrant that was issued on October 27 for Parenting Interference, a violation of Montana State law. Taylem is safe and in protective custody, awaiting reunification with his mother.

(Original story) A chair stood empty this past Thanksgiving Day. A family ate without their youngest member but was filled with hopes and prayers for his safe return.

On Oct. 9 Autumn Jorstad met with Raymond Berry in the Sidney Reynolds parking lot to get their 4-year-old son, Taylem Berry, back. There was an argument and Jorstad's nightmare began. Berry picked up Taylem, put him on his shoulders, and walked away. Jorstad tried to call Berry to talk to him or Taylem but he never answered and eventually disconnected his service. Jorstad was discouraged from contacting the police but she eventually did tell them on Oct. 18. She said, "Everybody kept telling me that there was nothing they could do. Everybody was wrong and it cost Taylem a week." Sidney Police did a welfare check on Berry and found that he had moved out of his apartment. Further investigation found that he had quit his job around the time he took Taylem. According to http://www.missingkids.org, on Oct. 27 a felony warrant for custodial interference was issued for Berry. On Nov. 2 a BOLO was issued about Taylem's abduction and it began circulating on social media. On Nov. 9, Jorstad was interviewed on Williston Trending Topics News Radio about Talem's abduction. As of Thanksgiving Day, no Amber Alert has been issued for Taylem. According to missingkids.org, they are activated in the most serious child abduction cases.

Taylem is 3'6" and 39 lbs. He has brown eyes and, at the time of his abduction, had blonde hair and a wiry build. He may be going by the name of Ragnor AllFather Berry. Berry is a 39-year-old Army veteran. He is 5'9" and 200 lbs with brown hair, brown eyes, and a stocky build at the time of the abduction. Berry may have untreated PTSD and, at times, is suicidal. According to Jorstad, it was giving him trouble last year and he told her that he "Barely feels he has control of his mind". She said he had threatened to take Taylem many times since his conception. Berry is a former truck driver, has survival training, and owns MREs, a water purification system, gold, and silver. He loves to camp and can survive just about anywhere. It is believed that they are traveling in Berry's 1995 dark green Ford F-350 pickup, Montana license plate F0016. It may have a matching topper and may be pulling a silver or grey Haulmark enclosed trailer, Montana license plate BSY618. Please contact local law enforcement if you see or have contact with either Taylem or Raymond Berry. The Sidney Police Department declined to comment further about the case.