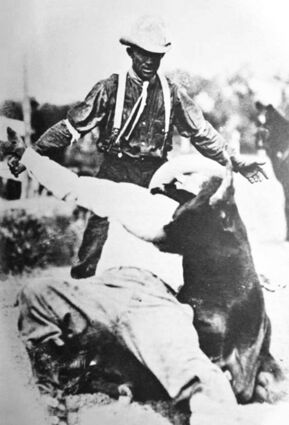 Billy G. "Snoball" Davis appeared in the Sidney area as a young boy from Cheyenne, WY around 1941. Reports vary on how exactly he arrived; some say by train, some say he walked. Others say he was found snoozing behind the stockyards. Either way, Snoball was taken in by Oakley and Leta Dayton, who he affectionately referred to as "Papa" and "Mama" and worked with the Daytons until the Fettigs bought their outfit in 1953. At that point, he befriended Ray Fettig and a lifelong friendship was struck.

Snoball received his nickname during a Fettig Bros. Rodeo's bull riding while working as the barrel man. He was a talented rodeo cowboy, a good idol, and great with the children that came around. In December 1972, he helped drive 650 head of cattle from North Dakota to Montana in -34º weather in just 18 days. A friend of Snoball assisted him in getting signed up for social security so he could work at the stockyards – which included coming up with a legal name and a birthdate for this man who had previously had neither. "Snowball, yeah, he's been around here forever" seems to be the consensus amongst the Sidney community. He's been described as gracious, humble, and humorous, and by walking into Sadie's Café and saying his name, you're sure to see nothing but smiles and hear stories about the local legend.

Snoball received the Sidney Health Center Extended Care's "Resident of the Year" award amid much celebration on Feb. 24, 2021. He enjoyed living there for more than 13 years, and often received visitors from his earlier years – including dear friends Dennis and Janice Peplow. He was beloved by the residents and staff and spent his retirement watching rodeos and old westerns – often while sneaking a chew.

Snoball is survived by the many people that knew and loved him, and his story which will continue to be told for generations to come – as well as immortalized in the many news articles about him throughout the years.