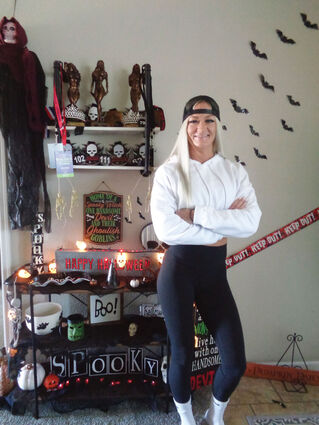 Erin Owens, Sidney, has competed in bodybuilding at competitions in Montana, North Dakota, Utah, and even on the east coast in Pittsburgh, PA taking first in many events. (Photo by Jaymi Mozeak)

While visiting her sister in Salt Lake City, UT, back in 2018, Erin Owens, Sidney, was talked into trying what would very soon become her passion. 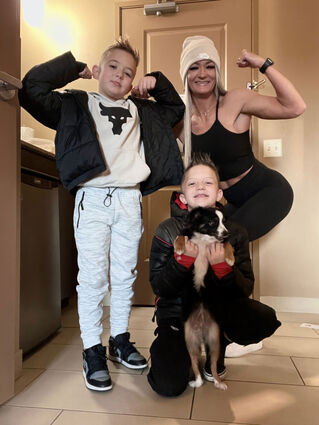 Derek, left, and Camron, bottom right, are very supportive of their mother, Erin Owens, top right, as a body builder. They joined their father, Derek, not pictured, to watch her compete in May of 2021. (Submitted photo)

She started working out at home in 2014. She had just had her third child and wanted to lose the weight she had gained during the pregnancy. In 2015, she, her husband, Dennis, and three kids moved to Sidney. She got a job at Sidney Health Center and began working out at Healthworks in the hospital. By the time 2018 came around she was well past "getting back her old figure". She entered the NPC Viking Championship for bodybuilding and won 1st in True Novice, 3rd in Masters, and 3rd in Open. She loved it. The next year, Erin wanted to go to the Big Sky Championships in Missoula, however, the Owen's eldest son had decided he wanted to join the Armed Forces. Erin decided to sacrifice her competition so she and her husband could help prepare, support, and adjust to their son's decision. In 2020 brought the cancelation of competitions, but 2021 was a new year. After three years of trying, in May 2021, Erin was finally able to go to the Big Sky Championships in Missoula. She took 2nd in Masters and 4th in Open. In October, she competed in Fargo with her husband and she came away winning 1st in Masters and in Open. Erin said, "Until Fargo, it was just a hobby." She also qualified for Nationals. She was still in contact with the coach who her sister introduced to her and who helped her in Salt Lake City. He told her that she was ready for Nationals but it was decided that she needed some more stage time so she returned to Salt Lake City, in 2022, for the NPC and took 1st at Open, 2nd at Masters 40, and 3rd at Masters 35. Six weeks later and she was at the Pittsburgh Masters National to work towards her pro card with a stacked class. She took 7th and 14th in her classes. Erin plans to continue to compete at a National level.

Erin does not just compete as a bodybuilder. She is in the process of starting a new business, DECKD Fitness, and is a certified trainer and fitness coach through the National Academy of Sports Medicine. Through her business, she will provide clients with online workouts and nutrition plans but she will also be able to meet with local clients in person. Connect with Erin on Instagram or Facebook to signup for DECKD Fitness.