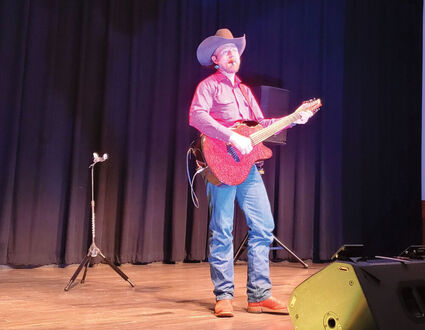 Country Western singer and songwriter, Greg Hager, only performs his original songs. His music sells in several different countries and spring of 2023 he will be going on his fourth performance tour in Japan. (Submitted photo)

Wednesday, Feb. 1, after the dinner at 7 p.m. Greg Hager, will be the entertainment at the 70th Annual National Hard Spring Wheat Show to be held at the Grand Williston Hotel and Conference Center, 3601 2nd Ave. W, Williston.

Hager is a North Dakota native born and raised in Valley City, ND, west of Fargo. He was named the 2020 Academy of Western Artists' Artist of the Year for 2020 and the 2019 Pro Cowboy Country Artist Association's Entertainer of the Year. He has recorded nine albums so far and plans to start recording his 10th album later in 2023. Hager performs an average of 140 concerts per year. He did his first recording in 2009 and has been performing full-time ever since. In May 2023 Hager will go on his fourth tour to Japan. According to his website, http://www.greghager.com, Hager regularly sells music in over a dozen countries. In spring 2017, Hager made his first concert tour in Japan, completing 24 concerts. He now makes annual tours in Japan performing only his original country, western, and Gospel songs. Even though Hager's music is heavily influenced by John Denver, Roger Whittaker, Gordon Lightfoot, Paul Overstreet, Clint Black, George Strait, and many others, he only plays original songs, a western style type of country.

In Valley City, Hager grew up in a musical family. Everyone either sang or played instruments. At age seven, Hager started showing interest in playing guitar. He did not get lessons but, instead, watched others play around him. His family always grew wheat but this will be his first time attending the National Hard Spring Wheat Show.

As it will be a small venue, Hager is honored to be joined onstage only by his wife, Andrea, for a few songs. Hager said, "As a road musician I tell stories. I try to captivate the audience and take them along on the ride."