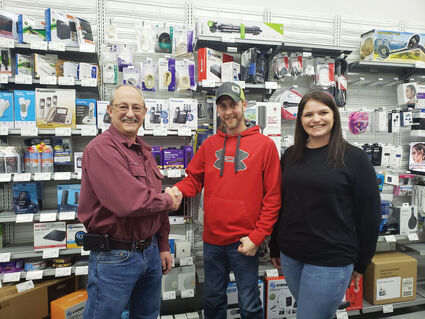 The excellent service and top quality products we have all come to expect from ElectricLand Inc. in Sidney will continue under the new ownership of Tom and Chrissy Quigley. The couple purchased the business Jan. 1, 2023 and have plans to relocate and expand. In 2011, Tom moved to Sidney from Rochester, NY with his now wife, Chrissy, who is a Sidney native. With over 20 years' experience as an installation technician, he immediately started work at ElectricLand, providing design, bidding, and completion of low voltage systems including audio, video, security, fire systems and more.

March 1, Quigleys will be relocating the business just down the block to the former Fastenal building at 205 2nd Ave. NE where they plan to expand the retail space and products. ElectricLand is your local source for TVs, computers, laptops, home stereo systems, portable speakers, cell phones boosters, and all the essentials such as batteries and cables. They also handle Dish Network. Low voltage systems, security cameras, access controls and monitored security, sales and installation will also be a top priority.

Raleigh Peck opened ElectricLand in the current LinCare building July 10, 2000 after he purchased the Radio Shack portion from Leif Anderson. He then moved the business to the Village Square Mall for nine years, the Shops at Fox Run for 5 years and finally the current location for four years. He has seen a lot of changes over the years. "That's electronics," he said referring to the enormous changes the industry has seen. He started with great ambitions of selling VCRs and tube TVs and ended up with flat screens, DVRs and streaming. He also experienced the evolution from bag phones to cell phones and analog to digital among many others. ElectricLand in little old Sidney, MT was in the Top 5 Radio Shack dealers in the country before Radio Shack went bankrupt. When that happened, Peck found new suppliers and kept on selling and servicing the products his customers needed and wanted. Initially focused heavily on retail, Raleigh gradually shifted the focus more to custom installation with Quigley as his lead installation tech. "He's the perfect fit to take over," Peck stated. ElectricLand still has everything it ever had, except cell phones.

Peck expressed his deepest gratitude to all his loyal customers and assures everyone that Tom and Chrissy will take good care of them with the same great attention ElectricLand is famous for. Peck isn't leaving the area and will still be around to help when needed.

Peck has no big plans for his retirement but is taking a well-deserved vacation soon! Knowing that he was going to sell the business, Peck accepted the position of second vice district governor of the Sidney Lions Club and will keep busy visiting other clubs in his area. "It's a whole new learning experience," he explained. Pecks also have kids and grandkids scattered throughout the country and are looking forward to having more time to enjoy them.