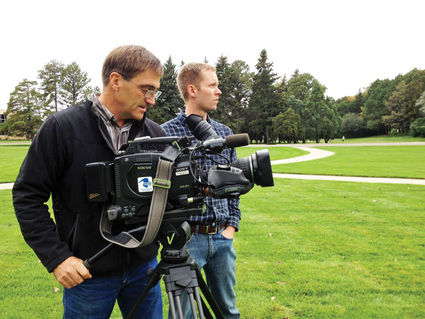 Dave Geck of Prairie Public Video (left) and Daniel Stenberg during the filming of the documentary.

Three years in the making, the 6 BROTHERS documentary is set to premiere on Prairie Public Television on Wednesday, February 26, at 8pm CT. Cooperatively produced between Daniel Stenberg and Prairie Public, the hour long documentary weaves together interviews, archival footage and letters sent during World War II, to show how a North Dakota family experienced the Great Depression and World War II. Further it touches on how their lives and experiences have helped to shape future generations. The six brothers include: Arnold (1912-1994), Cap (1914-2002), Chris (Daniel's grandfather) (1916-2006), Henry (1918-1945), Ray (1925-1999) and Selmer (1932-1941).

Those from McKenzie County that have interviews included in the documentary include Paul Bergem, Lillian Bergem, Jerald Leiseth, Carlyle Stenberg, Titus Stenberg, Neal Shipman, Elisa Thibodeau, Rick Lawlar and Miles Johnsrud. Tim Melby created original acoustic guitar music for it. Funding for the project came from the North Dakota Humanities Council and about 80 other businesses and individuals.

The Pioneer Museum of McKenzie County has been the fiscal agent for the project. Daniel is the son of Carlyle and Gayle of Watford City. He is a 2001 graduate of Johnson Corners Christian Academy and is currently living in Bismarck working as a Research Analyst for the State of North Dakota. 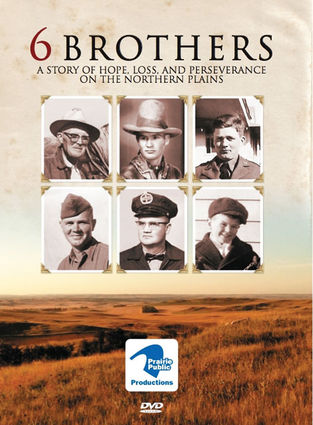 Before premiering on Prairie Public, there are three free in-person screenings: Bismarck at 7:00PM CST, February 20, 2014, Butler Hall in the Gary Tharaldson School of Business at University of Mary; at 3:00PM CST, February 23, 2014, it will show in Livdahl Lounge in Frontier Hall at Williston State College; and February 25, 7pm at the Reiland Fine Arts Center at the University of Jamestown. It is also scheduled to show during the Watford City Centennial Celebration on June 27-28.

More information, including access to letters sent during World War II, is available at: http://www.6brothersfilm.com