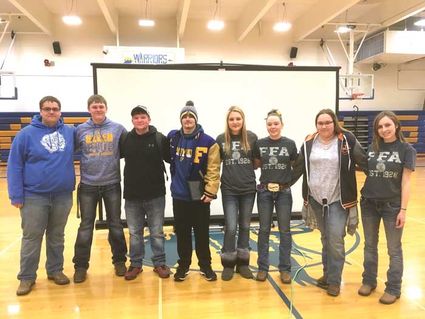 On Thursday, February 22nd, the Fairview Future Farmers of America (FFA) Chapter presented an assembly to the junior high and high school students at Fairview High School. Fairview FFA members discussed the benefits of joining FFA, how to join the organization, events members can compete in, and past competitions the members have participated in. The members also presented a Kahoot game to quiz the students' knowledge on agricultural topics.

The Fairview FFA Chapter held dress-up days on each day of the week, coloring contests for elementary students, a coin drive, and a meet n' greet with farm animals. The FFA members brought animals from their farms and ranches to school for students to meet. "Last year was the first year we celebrated National FFA Week since our chapter was just getting started in 2016. The goal for this year's National FFA Week was to add on to what we did last year. This year we painted windows, held fundraisers, announced agricultural facts over the intercom, and held a petting zoo outside the school. We also hid an FFA emblem around the school for students to find and once they found it, they were rewarded a $10 Subway gift card. It was definitely a successful week," said Fairview's FFA President, Lexie Selting.

National FFA Week occurred from February 17th to the 24th. It is celebrated around George Washington's birthday, February 22nd, because of Washington's legacy as an agriculturist and farmer.Every year, FFA chapters around the United States celebrate National FFA Week. It is a time for chapter members to host group activities, conduct service projects, recruit new members, share agricultural information with others, advocate for agriculture, and it is also a chance for students to show off their FFA pride.