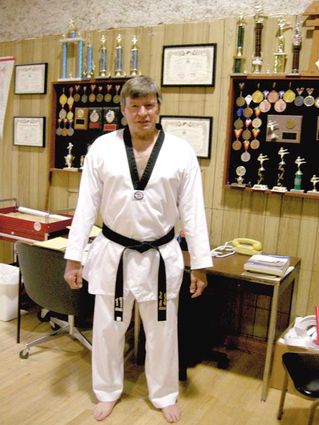 A few months ago, on April 21st 2018, Mike Bergh reached a high accomplishment. He was announced to have reached the rank of the 7th-degree black belt in Tae Kwon Do. He and a few of his students participated in the 52nd annual Karlo Fujiwara Memorial Tae Kwon Do and Judo Tournament at MSU Billings. It was hosted by the Martial Arts Academy of Billings and also included the qualifier for the nationals. During the tournament, two of his students placed 3rd in forms and sparing while one, Caleb Baxter, was 1st in forms and sparing plus he qualified for the nationals in Salt Lake City July 2nd through the 9th. When Mike took the stage he was announced as a seventh degree black belt.

Mike Bergh grew up mostly in Kindred, ND. He took Tae Kwon Do classes in Fargo where his older brother, Lester, introduced him to the Martial Arts in 1977. He moved to Sidney, Montana where he took classes at Sidney Tendokan Tae Kwon Do and Judo in 1984. Mike achieved his first degree in 1986 and took over the school in 1988. When asked why he has kept at Tae Kwon Do for so long Mike said, "I did it for exercise at first then just continued on." He is also a second degree in Judo but had to back away for physical reasons. Now, in the summertime, he and Assistant Instructors Jerrold Baxter and Amy Bieber teach a small class of just 6 or 7 students. When school starts attendance goes up, however, and they end up having to divide the class into one for younger kids that only lasts 45 minutes and another for older kids that lasts for a full hour. The cost is $45 a month per child and they meet twice a week on Tuesdays and Thursdays from 6:30 pm till 7:30 pm. June 2nd they held a car wash fundraiser to help with the cost of Caleb Baxter going to the Nationals July 2nd - 9th at the Salt Palace Convention Center in Salt Lake City Utah. They also plan on doing demonstrations on stage during the Sunrise Festival of the Arts July 14th.

Besides teaching children Tae Kwon Do and Judo, Mike, Jerrold, and Amy have gladly honored requests for women's self-defense classes. Those wanting more information can visit their Facebook page at http://www.facebook.com/sidneytendo or visit the school at 117 N. Central Ave. in Sidney Montana during business hours.