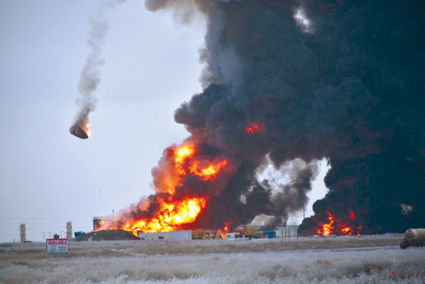 An explosion rocked a White Owl Energy Services saltwater disposal site on Thursday, which led to a temporary evacuation of the Black Gold Suites and the yard and apartment owned by Mann Energy Services. The incident was east of Watford City, approximately a quarter-mile from Highway 23 in McKenzie County. Reports indicate that many in the surrounding area, some well more than a mile away, felt the concussion and heard the explosion first hand at about 12:15 p.m. Central Time.

The Roundup spoke with Karolin Jappe, the emergency management coordinator for McKenzie County, who was en route to revisit the scene at the time of the interview.

Jappe reported, "Normally I have saltwater disposals that get hit by lightning and explode in the summer, but we don't ordinarily have an explosion and fire like this in the winter. Our assumption – and it's just a guess at this point – is there was a truck offloading. It's possible that if they didn't put a ground wire on the tanker during the disposal, it could be dangerous. If that driver forgot to ground the tanker that could've caused it."

Jappe reiterated that the assumption was just a theory not confirmed. She went on to explain why saltwater is so explosive.

"You don't know which well the drivers are coming from," Jappe explained, "but some have a lot of H2S gas. Those gases are always present to some degree. A treater has to separate the gas from the oil from the water. A high H2S well could produce water that is potentially explosive."

When asked if a cause of the explosion was determined, Jappe said, "No, it is not. The fire department left at 1 a.m. and this morning the fire was back up again due to several hotspots, but nothing out of control."

Jappe explained why the fire department chose not to put out the fire, but rather let it burn. 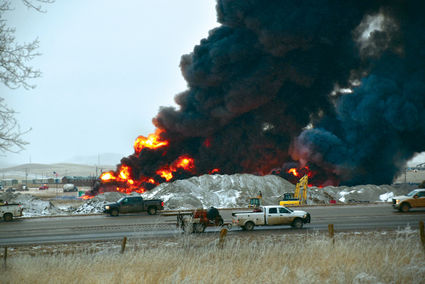 "The fire chief always has the ultimate determination of what to do, but when you're dealing with a disposal site, the fire chief will talk to the company. If there's nothing left to save and it's not going to jeopardize public health and safety, you probably want to let it burn. The reason is when you add water and foam on top of the fire, you add a lot of contamination to ground and environment."

Jappe continued, "If you use water and foam, you have to then pick up all the contaminated ground. I'd rather have an oil spill any day than a saltwater spill. It's just nasty. It sterilizes the ground so bad it kills the good, bad, and ugly. Instantly when there's a saltwater spill you can tell it's killed everything. So the best option was just to let it burn."

According to Jappe, law enforcement closed nearby roads so motorists wouldn't inadvertently come into contact with potentially dangerous fumes. That road closure, along with the evacuation of nearby dwellings and businesses, has been lifted.