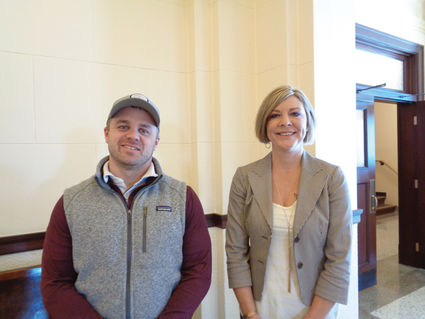 Public Works director Adam Smith and Commission on Aging director Jodi Berry, along with the Richland County Commissioners, will be developing plans for the armory building.

Richland County completed the purchase of the Montana National Guard Armory Monday morning, with a price tag of $600,000.

The National Guard vacated the armory building in the beginning of 2016 when they transferred to Culbertson. The Department of Military Affairs then approached the county about purchasing the building, which the county had originally sold to the state in 1955. Negotiations began in August of 2017, with plans to close in the summer of 2018. However, lead abatement in the gun range in the basement delayed the deal. That turned out to be a good delay for the county with a new appraisal coming in at 10% less than the original.

The building will be used primarily by the Commission on Aging. Not only will it store the buses and vans, but the offices will be there, making it much more efficient for drivers and staff. Currently, bus drivers have to jockey for space to park, and then go to the community services building to do paperwork after each shift, wasting time that would be better spent ferrying people. Moving the buses to the armory will also free up space at Public Works. The Commission on Aging works closely with Public Works and maintenance on the vehicles will continue to be performed by staff there.

Privacy is always a priority for the Commission on Aging since they deal with sensitive matters such as Social Security and Medicare. Director Jodi Berry said the new location will provide excellent privacy for clients.

Commodities will also be stored and distributed in that location. Much larger storage, ample parking, and better access for the delivery trucks will make that program operate much more efficiently.

No major renovations are needed prior to the move to the armory since the building is in pretty good shape but some minor cosmetics changes such as a coat of paint and perhaps some new carpet may be considered. An elevator to provide handicap accessibility to the second floor is hoped for in the next couple of years with Berry looking for grant money to fund that.

There are a couple of sheds on the property that may get moved to the public works area, freeing up some extra parking according to Public Works director Adam Smith. "Adam is great to work with so we'll see what works best for each department," Berry stated.

Smith is pleased with the purchase stating, "The purchase made sense from the county perspective. It's (Commission on Aging) now one whole complex."