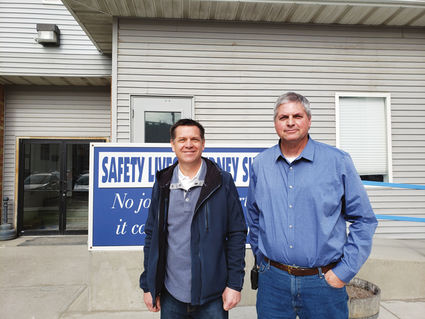 When American Crystal purchased Holly Sugar many years ago, then agricultural manager Russ Fullmer was asked about the long-range prospects for the factory. His answer was that the factory would keep operating as long as it was profitable.

Brian Ingulsrud, vice president of agriculture for American Crystal Sugar Company and chief operating officer for Sidney Sugars, was in Sidney Monday to address the issue of the new beet grower contract with Sidney Sugars employees and the public after recent negative publicity.

Sidney Sugars manager David Garland said that sometimes employees feel stuck in the middle, between growers and the factory. He said they were pleased to continue working under American Crystal. "The main focus," he said, "is to continue to operate this factory for many years to come,"

Ingulsrud said American Crystal is happy to have reached an agreement with the growers that creates a balance in profitability for the fields and the factory. Ingulsrud spoke to the fact that growers are frustrated by the new contract which pays a lower amount for their beets. He stated that, while the growers have been profitable the past five years, the factory has not. In order to address that, and continue operations, the payment to the growers needed to be reduced. "Even with the reduction in payment, growers will realize a profit," he said.

"The Sidney Sugars growers grow the very best beets in the U.S.," Ingulsrud stated. "Above average yields and sugar content combined are terrific. The past 10 years show a consistent upward trend." He said that with the higher yields, even with the lower payment per ton, farm profitability will be preserved. "But, there has to be profitability in both the grower fields and the factory for the continued growing of beets in this area," he emphasized. "By adjusting the payments, it keeps them and us profitable. It provides sustainability."

He stated that American Crystal plans to continue operating the Sidney factory well into the future. Good evidence of that comes from their plan to spend approximately $3 million in capital improvements at the factory this summer, which is the most spent in several years. "This speaks to the fact that we plan to continue to operate in the future," he said. A diffuser bull gear will be installed this summer at a cost of $1.5 million, $1 million will be spent on the waste water project which will improve the way the system works to reduce organic matter in the water, plus several other projects including upgrading electronic controls are in the works. All projects will improve the reliability of the factory. The newer electronic controls will improve efficiency and increase the amount of sugar produced at the factory, without a loss of jobs.

Negotiations between growers and American Crystal to purchase the factory failed to reach a mutually acceptable deal. After realizing that no deal was going to happen, Sidney Sugars turned their focus to a new contract. The goal was to have operations continue whether the factory was owned by the growers or American Crystal. Of the 32,500 targeted acres, 31,606 have been contracted, with 80% planted as of Monday morning.