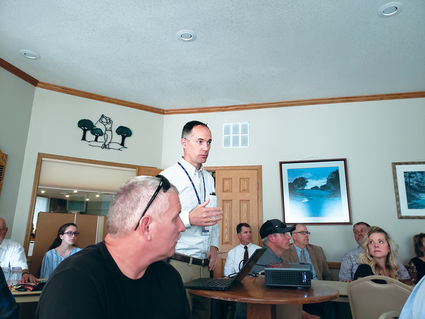 Cape Air officials met with community members July 10 to outline their plans for continuing air service to northeastern Montana. The Essential Air Service contract is up for renewal, with a meeting in Billings July 12 during which representatives from each area submitted recommendations to Washington. Walt McNutt is the representative for the Sidney area.

The biggest news from Cape Air was the addition of new twin engine Tecnam P2012 Traveller airplanes to their fleet. The planes will offer one additional seat, a luxurious cabin with Italian leather seats, improved heating, air conditioning, and noise control. Cape Air will take delivery of the first eight planes by the end of 2019, then one per month in 2020. The planes will be phased in to the market once pilots have completed training at their headquarters in Hyannis, MA. The company is currently awaiting certification of the Tecnam from the FAA. Cape Air is the world's first airline to place the P2012 into commercial service.

The current low fares will be maintained according to company officials.

Andrew Bonny, senior vice-president of planning for Cape Air also spoke on Cape Air's partnership with Rocky Mountain College where their aviation grads gain flight time in the co-pilot seat, then are able to advance to major airlines, providing a well-paid career.

Questions were asked about possible service to Helena, especially during the legislative session. However, EAS only allows flights within it's designated area. Bonny did raise the possibility of charter flights out of Billings in time for the next session.