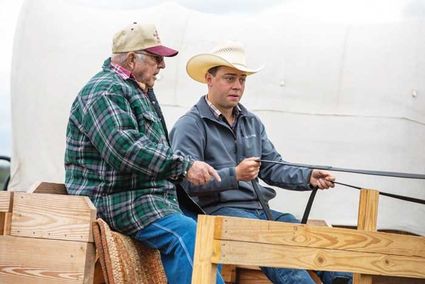 A significant part of North Dakota's history begins around the time when settlers came across the prairie in wagon trains. These trains reached places that eventually became homesteads, towns, and cities. Although the days of the wagon trains are long gone, you can still experience what it was like long ago on the Long X Wagon Train - a train of covered horse-drawn wagons and riders based out of McKenzie County.

This year the Long X Wagon train is celebrating 50 years of keeping the pioneer experience alive. The wagon train began in 1969 and has continued to do wagon trains every year since then. "We have done wagon trains two to three times a year during the spring, summer, and fall. We try to do it around the time the cowboys have the cattle out in the pasture," explained Lyle Leiseth, an active participant in the Long X Wagon Train.

On Wednesday, June 19 participants of the Long X Wagon Train celebrated the 50th Anniversary with a Wagon Train that started 15 miles northwest of Watford City. The next day riders participated in the McKenzie County Fair Parade. "The 50th Anniversary Wagon Train ride started at 8:30 a.m. at Craig Hystad's place, and there was a noon meal provided. The ride ended at the Watford City Fairgrounds where there was a big evening meal furnished, and on Thursday we rode in the parade," stated Leiseth.

The Long X Wagon Train was established by Lee Stenjem and Clarence Leiseth. "Back when it started getting going we had up to 17 wagons with a lot of riders, now there are not as many people participating in it as much as they used to. We are always looking for new blood, and it doesn't take much money to come along and have a little fun," said Leiseth.

The Long X Wagon Train has covered ground in Fairview, Cartwright, Alexander, Killdeer, Minot, Arnegard, and Watford City. Every time they do a wagon train, they try to pick a new area. Leiseth said, "We always try to pick new scenery that people haven't ridden around in before." During the trip, you can ride in a covered wagon, or bring your own horse and travel by horseback. You'll cross some truly scenic territory. 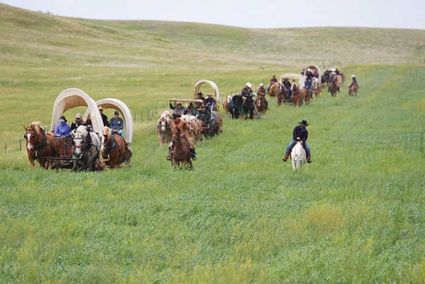 The Long X Wagon Train provides an opportunity to relive North Dakota history. It's one thing to read about history, but it's another thing to stand there and touch it, see it, feel it, and experience it. When Leiseth was asked what the primary purpose of hosting wagon trains every year was, he responded, "to keep the wagon train alive." He feels that preserving the wagon train tradition is important.

Anyone interested is encouraged to attend. "It is a lot of fun for the whole family!" said Leiseth.

People of all ages can ride along with the Long X Wagon Train for a small annual fee of $5 per person or $10 per family. Dues must be paid prior to riding and can be mailed to Long X Wagon Train, 3379 134th Ave NW Arnegard, ND 58835.