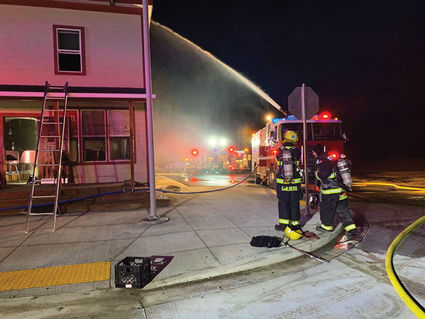 On Aug 14 at 9 p.m. the Arnegard Fire Department responded to a report of smoke coming from the kitchen area of the PDQ. Upon arrival they found heavy smoke coming from the southwest corner of the building. We deployed lines and made dynamic entry on the west side knocking the fire down very quickly. Firefighters kept the blaze contained to the kitchen area although there was smoke throughout. They called for tender assistance from Watford City Fire and they sent 2 heavy engines with 10 firefighters of their own. We started taking turns doing overhaul and got the rest of the hot spots taken care of. The last Arnegard unit cleared the scene at 3:30 a.m. on Aug. 15. The restaurant had been closed for the past 30 days. The cause is under investigation. (Photo submitted)