Be on the Lookout for Anthrax

Anthrax spores can survive for years under the right conditions. 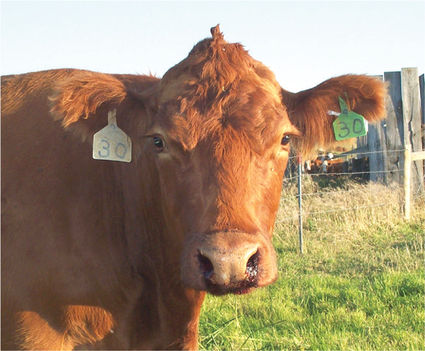 This animal is infected with anthrax. (Photo courtesy of the North Dakota Department of Agriculture)

Anthrax continues to be a concern for cattle producers in North Dakota.

"Recently, a case of anthrax was positively identified in a southwestern North Dakota county," says Gerald Stokka, North Dakota State University Extension veterinarian. "This is a reminder to our cattle producers that the threat of anthrax is still present. It appears that during times of high rainfall and/or very dry conditions, the spores are uncovered and cattle are at risk of infection."

Anthrax is a disease in cattle caused by a bacteria known as Bacillus anthracis. This bacteria has a special survival mechanism called spore formation. This characteristic allows the bacteria to produce very hardy spores with a high survival rate.

The spores can survive for years under the right conditions. When these spores come into contact with susceptible cattle, they can "hatch" and infect the animals, resulting in disease and death.

Often the only initial signs of anthrax infection are finding dead cattle. Cattle can die without signs of illness for a number of reasons, including lightning strikes, clostridial infections and toxicities, but anthrax always should be considered, according to Stokka.

"If the diagnosis of anthrax is suspected and confirmed by your veterinarian, then vaccination needs to be implemented as quickly as possible," he says.

The commercial vaccine available is a live attenuated (nondisease-causing) spore vaccine. The dose is 1 cc administered subcutaneously in the neck region.

All adult cattle and calves should be administered the vaccine, and treatment with antibiotics should be withheld because it may interfere with the immune response. However, when faced with an outbreak situation, administering an antibiotic and a vaccine concurrently has been effective, Stokka says. Consult your local veterinarian for a recommendation.

"Consider removing all cattle from the pasture where anthrax deaths are suspected because spores present can infect the remaining animals," Stokka advises.

Also, anthrax carries a risk to humans, so take care to not disturb the carcass. The recommended method of disposal is to burn the carcass and soil on which the carcass was found after placing them in a trench dug in the immediate area of the death.