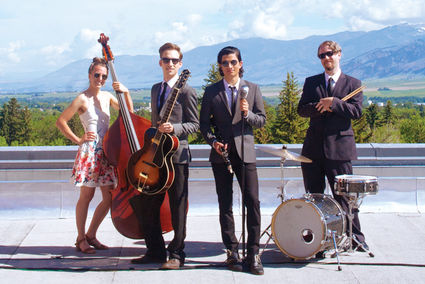 The Rhythm and Ramble Quartet

The Northeastern Arts Network proudly presents the music of the Rhythm & Ramble Quartet Thursday, October 3. Rhythm & Ramble is a jazz group based in Bozeman, MT led by Colby Tinsley (reeds and voice) and Tyler de Caussin (guitar). This acoustic swing band is founded upon a shared passion for pre-war American Jazz and builds on its unique legacy, refashioning the spirit and heart of classic songbook melodies into a fresh and modern setting.

Tyler de Caussin jumped into playing pre-bebop jazz guitar during his studies at Montana State University. As a guitarist, Tyler draws inspiration from the gypsy-jazz of Django Reinhardt, the rhythm playing of Freddie Greene, as well as the electric guitar sound of Charlie Christian. He also performs with the Bridger Mountain Big Band and the Michelle Manzo Quartet.

Colby Tinsley is a saxophonist and vocalist from Spokane, Washington who currently attends Montana State University. He is well versed in various musical genres including bebop, funk, and big band jazz. Despite playing saxophone for only five years, he has opened for musicians such as Tony Bennett, Gordon Goodwin's big phat band, and "Ryan Montana" Matzinger. He actively performs in a variety of jazz and funk bands, namely Rhythm & Ramble, Permafunk, The Royal We, and the Bridger Mountain Big Band.

Anna Hatcher began playing classical upright bass in the 5th grade. Upon entering Montana State University, she realized that Jazz offers something that classical music does not: the unlimited freedom to express one's individuality. Anna broke away from reading music note-for-note and dove into jazz and improvisational playing. In addition to Rhythm & Ramble, Anna currently plays with jazz ensembles Howard Beall & The Fake News and The Royal We as well as Croc Pot, a jam rock ensemble performing original music.

Alex Platt began learning the drums at the age of 10, performing at the age of 13, and received his degree in jazz from the California Institute of the Arts. He has performed and recorded with jazz artists such as Alice Coltrane, Oranyon Coltrane, Jack Walrath. He also is part of the rotating faculty at the Stanford Jazz Workshop. After many years in Los Angeles, he has returned to Bozeman and continues to perform, teach, and produce music.

The Big Sky Series is made possible in part by the Montana Performing Arts Consortium Presenter Development Program, which is supported by grants from the National Endowment for the Arts, Montana Arts Council, legislative grant from Montana's Cultural Trust, and WESTAF.