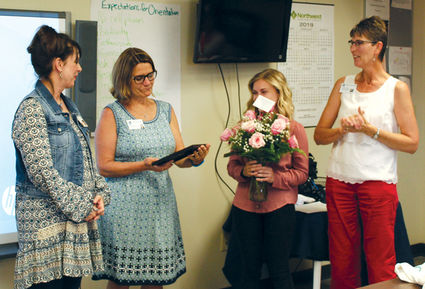 The award originates from the work of Mary E. Soules, MD, who was Director of the Disease Control Division of the state health department. "Dr. Mary" was a friend to all who knew and worked with her, and represented the essence of public health. The award is given annually to one person who has exemplified public health principles and practices throughout his or her career in Montana.

LaPan represents Eastern Montana communities on state and national boards. Aaron Wernham, CEO of the Montana Healthcare Foundation wrote of LaPan, "as a trustee of the Montana Healthcare Foundation, Ms. LaPan has been a tireless and effective advocate for strengthening the public health system in Montana. In this role, she helped craft the Foundation's initial grant to strengthen the public health system, which has resulted in grants and technical assistance to boards of health and local health departments in more than 40 counties and Tribes around the state."

More locally, LaPan has developed the Richland County Health Department into a community asset hosting a wide variety of services that encompass the social determinants of health. LaPan has spearheaded efforts in a community-building project; Communities in Action, to gather data on community needs and create collaborations among partners to positively impact our community.

Sarah Sadowski, Governor's Office of Community Service, stated, "Judy is one of those leaders who genuinely cares for her fellow community members and the staff of RCHD. She serves professionally and is often the one giving others the credit, exemplifying the Award."

It was an honor for the staff of Richland County Health Department to nominate Judy LaPan for Montana Public Health Association's Distinguished Service Award.