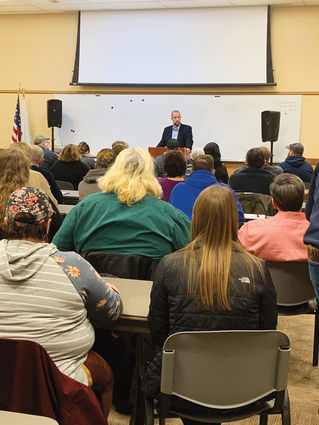 The group requested that Richland County elected officials commit their support to upholding typical conservative views on abortion and gun rights. The group proposed Richland County be declared a "Sanctuary for Preborn Children", citing the "inalienable right to life and the inherent dignity of all innocent human beings at every stage of development," and a "Sanctuary County for Gun Rights," urging citizens of Richland County to promote the right to keep and bear arms without infringement.

The group followed the lead of 86 Virginia counties, 72 Illinois counties, and over 200 other localities around the country that have recently declared similar statements. The objective, according to Pastor Jordan Hall, who led Monday's meeting, was to "inform the government that our local officials would not enforce unconstitutional laws."

Recent gun legislation around the country sparked the Central Committee to move forward with the request for Monday's meeting in relation to gun laws. "What the country is currently experiencing is a period of uncertainty regarding the safeguards of our liberty. The commonwealth of Virginia provides a good example of this. A few urban centers in Virginia were able to provide the numbers necessary to win the legislature and governorship and upon first opportunity passed draconian anti-gun legislation. We are seeing candidates for the presidency endorse gun confiscation at a time when the President of the United States has been impeached and is being tried in the Senate on the thinnest of margins. Should the opposition party win that effort in 2020 we will almost certainly see federal anti-gun legislation," Hall explained.

On the issue of protecting preborn children, Hall explains, "We have been trying to incrementally end abortion since 1973. While surgical abortions are reportedly down, we don't have firm figures from the abortion industry and those figures don't take into account chemical abortions. Additionally, the goal should not be fewer abortions. We should not rest until every baby is protected where they're supposed to be protected the most; the womb." He cites action by other local governments as the model for the "Sanctuary for Preborn Children" proposal. "Like with the Second Amendment, local governments are flexing their muscle to declare themselves sanctuaries for the unborn to affirm our commitment that every human being is deserving of being recognized as a person," he said.

The proposals were written as resolutions, which some have criticized doesn't hold any legal "teeth". Hall reiterates, however, "resolutions state resolve, in the most simple possible terms. Our current and future elected officials will know how we feel and the values we want them to uphold," he explained. "It signals to lawmakers how we feel and is keeping with the First Amendment liberty of "petitioning the government for grievances."

Hall said the proposal on gun rights is meant to support local officials should the defense of the 2nd Amendment be necessary. "Ultimately, I trust our officials, including our sheriff. These declarations are designed to express support for our officials in the preemptive case that they need to step in to defend our lives and liberty against unconstitutional acts of other political or governmental powers. It's precisely because I don't believe law enforcement would confiscate firearms that I want the community to express our support for them in the event that have to defend us our Second Amendment. They need to know ahead of time that Richland County will assert our Constitutional liberties."

The Central Committee will be assembling a steering committee for each resolution, to be tasked with collecting signatures of support. This way, Hall explains, "the movement is well beyond the confines of the GOP Central Committee. Faith leaders, civic leaders, community volunteers, law enforcement, and members of both political parties are invited to participate." Hall encourages members of both political parties to join in support. "I'm convinced that there are many Democrats who are pro-gun who would resist gun control measures as strongly as the rest of us," he said. "This is a values issue, not a political one. If you share Richland County values, by all means, come on board."

The group has received some negative feedback on the initiative already, both claiming the crowd was "militaristic", and that Hall himself is a radical for pursuing such an initiative. To this, Hall replied, "Not only is that patently untrue, it's a pretty bizarre accusation for what amounted to passing out a petition," and maintains the initiative was a GOP-supported endeavor, having been voted on at the regular December meeting of the Central Committee.

Hard copies of the petitions are available through several local churches, through members of the Central Committee, and the Sportsman Association, as well as online at http://www.richlandcountysanctuary.org. Though few have signed electronically, Hall reports that many residents have shown their support of the endeavor on paper copies.

The next step in the process includes the delivery of the petitions to the Commissioners. "At an appropriate time a group of us will go to the commissioners during a regularly scheduled meeting and politely hand-deliver it to them. At that point, we expect the commissioner to make the declaration given the will of the county or perhaps offer an alternatively-worded but similar declaration prepared by their legal counsel."