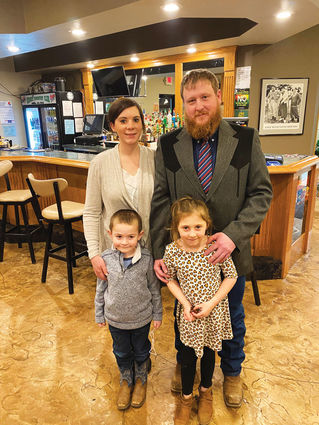 Feb. 6, Brandon Ler announced his candidacy for House District 35, which encompasses Richland County. The Lincoln-Reagan Day annual event had a crowd of local Republicans who gathered to hear both local and statewide candidates for office. More than a dozen candidates were each given three to ten minutes to speak to the room of voters and present their credentials and qualifications for office.

Brandon Ler, a native of Richland County, filed for office several weeks ago but waited until the Lincoln-Reagan Day banquet to provide his first public comments. He has chosen Shandon Erickson as his campaign treasurer.

Ler is married to Stephanie, who works for the Richland County Health Department, and they have two children. His public service includes election to the Savage School Board and he also serves on the Savage Volunteer Fire Department. Ler, who holds the vice chairman position on the Richland County Republican Central Committee, owns Double L Fencing, runs cattle, and has experience in the oilfield as a pumper.

Ler's speech revolved around the theme of fencing, which he wove into a commentary on government.

"I've learned a thing or two hanging fence," Ler said. "Good fences make good neighbors...barbed wire symbolizes the heart of the old West. It's not about keeping you out, but it's about keeping what's yours in. Keeping your fence up protects your property and your neighbor's property."

He also discussed the need for the HD35 representative to be more reliable as a conservative in Helena, saying, "I'll tell you straight up on which side of the fence I stand. Industries like oil and gas and agriculture shouldn't be given so much red tape they go out of business. Government ought to support commerce, not saddle it with tax burdens. Entitlements like Medicaid Expansion shouldn't be done just because it's good for the few; there are principles at stake and one of them is a representative ought to vote the way the county believes, and we voted against it."

Ler's comments refer to incumbent Joel Krautter's vote for Medicaid Expansion, which the county overwhelmingly voted against on a ballot initiative prior to the vote at the capitol.

Ler went on, "A fellow shouldn't be afraid to say what party they belong to, and a fellow shouldn't be afraid to act like it. I'm not a conservative because I'm a Republican. I'm a Republican because I'm conservative in my values, opinions, and beliefs. And there won't be any doubt in the House who I'll caucus with. I believe I have the support of most or all of the legislators around Richland County in neighboring districts and Republicans in the state party who want a conservative in there they can count on."

Drawing laughter, Ler also included a comment about his beard, saying, "You can count on me not giving two pennies for what Democrat legislators across the state care about anything. I care what you think. In fact, there's only one issue where I may not listen to popular opinion. I've been told if I run for office I've got to shave my beard." He then added with a chuckle, "My wife is attached to it and won't let me."

Ler ended his speech by saying, "What you see is what you get. The house race isn't a career ladder for me. I'm going to take care of business, serve Richland County, and come home to take care of my family and my cows. That means I won't vote based upon what's best for my future, but I'll vote what best for yours."

Ler's speech drew the longest and loudest applause of the evening, with numerous state candidates rising to greet him with a handshake and word of encouragement and support.

Joel Krautter, Ler's opponent in the HD35 race, was absent from the event.

It needs to be pointed out that Joel Krautter was in Washington DC attending meetings so was unable to attend the Lincoln-Reagan dinner. He did however submit a letter to be read as did several other candidates who were not able to be there in person. Jackie Young read Joel's letter to the attendees.