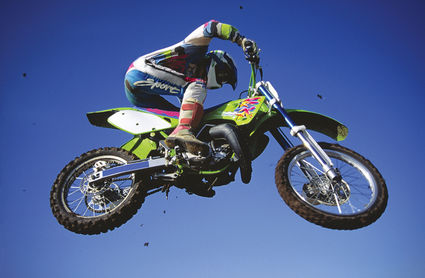 Two longtime motocross riders have teamed up to build a racetrack in their hometown. Joseph Edman and Eric Nelson are seasoned riders who designed De Fort Motocross located on the Nelson Farm 14 miles northeast of Williston.

"The track is just over a mile long, has a 24-gate start with multiple rhythm sections of varying size and several larger features, specifically a step up and a 90' tabletop," explained Edman.

Edman and Nelson met at a few years ago at a race school in Bismarck and their families have become fast friends at the track.

"Our families developed mutual friendships seeing each other at the North Dakota Motocross Association (NDMA) races every weekend," said Edman. "Eric and I both race the same class (Vet A) and so do our sons. We both have daughters that race or participate in the sport as well as very supportive and amazing wives."

Edman brought his love for motocross racing to Williston in 2013 but unfortunately the local track had just closed.

"I think when we drove down there and found out (Sundowners Motocross Track had closed) I almost cried," said Edman. "When Eric (Nelson) mentioned building a track out at their family farm I was all in!" Nelson said they came up with a name that represented his strong Norwegian heritage.

"De Fort originates from two Norwegian words which translates to "The Fast". I have a very strong Norwegian background," he said. "The De Fort Logo is also built from Norwegian symbols which also represents strength and conquest. A couple of friends of mine Luke and Carter Romo, Bainville area, helped bring this symbol to life."

Edman and Nelson designed and built the new De Fort Motocross. The entire track can be viewed from the south side and has ample space for spectators.

"Motocross is like life, there's risk but also reward and you get out what you put in," said Edman. "It's a family orientated sport and gives you the ability to meet people from all over the state, country and world for that matter," said Edman. "There also aren't many sports that incorporate fitness, camping, racing, cooking, motorcycles and everything that go along with that where the whole family can be together. Moto does that."

"It brings children closer to their parents. It brings long lasting friendships together. It brings out some of the most impressive sportsmanship and camaraderie I have ever seen," said Nelson.

The De Fort Motocross is in the midst of the permitting process but is open for practice (check out their Facebook page for dates and times). A motocross school is scheduled in late May and NDMA race in late summer. The free beginner school sponsored by MonDak Sports is sold out on May 22 but there is still space available on May 23 and 24. Click on the link https://www.sedlakoffroadschool.com/ to register (10 openings).