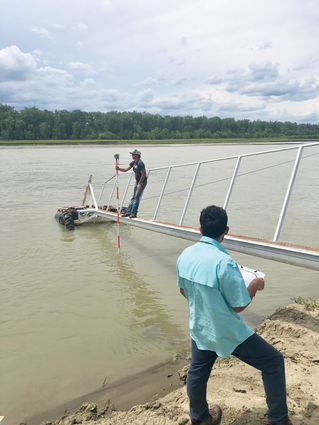 The United States Army Corps of Engineers (Corps) intends to test the flows coming from Fort Peck Dam in hopes it will benefit pallid sturgeon recruitment. The proposal originates from required Endangered Species Act consultation with the United States Fish and Wildlife Service, who issued a "no jeopardy" biological opinion in April 2018 on the condition that the Corps pursues the test flow.

To comply with National Environmental Policy Act (NEPA) requirements, however, the Corps must draft an Environmental Impact Statement (EIS) outlining their proposals and the respective economic and environmental impacts of each. The Draft EIS was scheduled to be released in May and involved raising the river flow to approximately 35,000 cubic feet per second (cfs) in June and then substantially lowering the river flow to approximately 8,000 cfs by July 1. The first test flow would occur in 2022.

"This is incredibly concerning from an irrigation standpoint," Liv Stavick, Missouri River Conservation District Council (MRCDC) coordinator said. "Approximately 160 pumps located downstream from Fort Peck Dam, provide irrigation for 70,000 acres of cropland between Richland, Roosevelt, Valley and McCone counties as well as the Fort Peck Tribes. Beyond the benefit to cropland, the rural communities in this area depend heavily on the increased tax base irrigated land provides to their local economies."

Dick Iversen, a Sidney and MRCDC board member rancher, describes some of the problems this could cause for irrigators, "Raising the river that high could flood pumps, electrical boxes, the roads to access pumps, and in some cases, flood cropland itself; while the low flow will leave many irrigators unable to access water at all."

Iversen explains that the impact caused by high flows dropping significantly in such a short amount of time is equally, if not more concerning, "When those high flows drop, it expedites the process of erosion and deposits mass amounts of sediment into the river. This will require dredging and extensive trench work in order to get pumps back up and running...all during prime irrigation season."

With help from the Missouri River Conservation Districts Council, local conservation districts were able to convince the Corps that the information they were using to assess the economic impact to irrigators was both inadequate and outdated. As a result, the Corps agreed to postpone release of the Draft EIS until after they had completed a thorough pump site survey and economic analysis.

The Corps is currently collecting that information; 60 total pumps were surveyed between July 8-15 and another 60 are expected to be surveyed by the end of August. The updated Draft EIS is scheduled to be released in December after this information has been reviewed, which will initiate a 60-day public comment period.

"It's imperative that irrigators and community members participate in the public comment process. While we won't know what the formal proposal looks like until December, northeastern Montana stands a lot to lose if it's anything like the proposal we saw this spring," concludes Stavick.