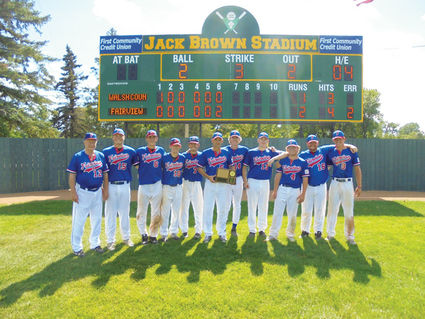 "We won the first game to Jamestown, 10-1, the second game to Tolna 14-3, and the Championship Game to Walsh County 2-1," stated Jim Duffey, Fairview Amateur Baseball player and lifelong supporter of Amateur Baseball.

This year, the team consisted of Jim Duffey, Jadin Norby, Jaxon Meyer, Garret Hill, Zach Carson, Carl Lindgren, Reed Hanson, Halston Thompson, Kyle Mischke, Chance Johnson and Camdin Miller. "Every year, we try to get a group of guys together for a tournament and try to keep it going, and this year, we really lucked out; we got nine young guys to join the team," added Duffey.

The Fairview Amateur Baseball team has not been able to play as many teams as they used to. Duffey explained that many teams are "folding," so the number of baseball teams in the area has been declining. Duffey said, "Many teams fold up because it is hard to get a group of guys together. Everyone - especially the younger guys- are busy, and they don't have time to play."

In addition to this, the Canada-US border has been closed due to COVID-19 concerns, which hinders the team from playing other teams in the Canadian region. "We can't go into Canada anymore, we used to play a lot in Saskatchewan like in Estevan and Weyburn," added Duffey. 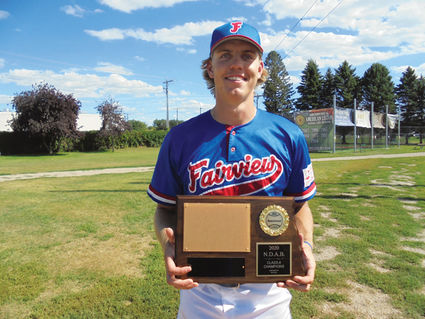 Garret Hill, pitcher, struck out 12 of a possible 21 outs in the championship game.  (Photo submitted)

When asked what his favorite thing about baseball was, he stated, "I don't know I was just born loving baseball. Ever since I was a little kid, I have just loved to play baseball."

Duffey encourages anyone that has a love for playing baseball to join the team. He said, "We are always looking for 35 and older guys." If interested in participating in the North Dakota 35+ State Amateur Baseball, give Duffey a call at 406-480-5223.