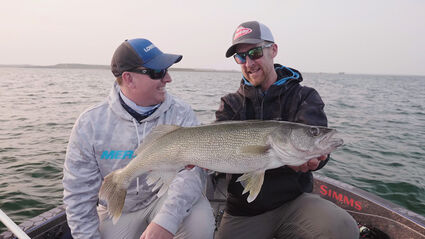 Jesse Reuter, left, and John Hoyer with one of the big fish that was caught on the show. (Submitted photo)

The Next Bite is an educational-based national television series that features champion tournament anglers, who explain how to get the most out of the latest tackle, boating, and electronics. In the show, they fish all over North America in search of walleye, muskie, pike, and other "Fish With Teeth".

Last September, Reuter guided Hoyer through his "home lake" Fort Peck and showed him where to catch big walleyes. "We both offer some great tips in the show on how to be successful in targeting big walleye on Fort Peck. It's a combination of knowing how to use your electronics and where and when to target these big fish. And also, what fishing equipment to use (rods and reels)," explained Reuter.

Reuter is an experienced walleye angler, as he has fished for many years and has even competed at the national level. "I have fished on the national level as a pro angler, which is where I actually met John Hoyer. We just got to be friends and he asked if he could come out to Fort Peck and fish. And I thought we were just going to go fishing but then he said he was going to bring his film crew and shoot a TV show,'" said Reuter.

John Hoyer is one of hosts of The Next Bite and was also named the Hottest Walleye Angler in the nation in 2019. "Let's just say he's a pretty good stick," added Reuter.

Reuter enjoys both the competitive end of fishing as well as teaching new people how to fish. He said, "I like being able to show other people what it is like to catch a fish and watch them experience that excitement. Introducing new people to a new sport is definitely what makes it fun."

He got addicted to fishing at a young age when his grandfather took him fishing as a little kid. "That was something I really enjoyed. I got really into it in my late 20s and got into tournament fishing and had some successful winnings." He even won the Montana Governor's Cup Walleye Tournament a few years back.

In addition to this, he prostaffs for a couple of major fishing brands including Mercury Marine, Lowrance Fishing electronics, Ranger Boats, and Pure Fishing. He also hosts fishing seminars, is a licensed North Dakota fishing guide, and is working on getting his Captain's License for Montana. If you are interested in learning to fish or sharpening your fishing skills, Reuter suggested hiring a guide for a trip or attending a fishing seminar.

Reuter explained that whether you are a seasoned veteran or a brand-new angler, you will want to make sure that you watch this episode. He added, "There are things talked about in this show that everyone can learn from." This episode will air on The Discovery Channel Saturday, Jan. 23, at 7:30 a.m. CST. For more information on The Next Bite, visit http://www.thenextbite.com.