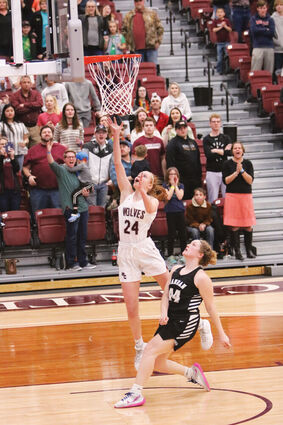 Watford City's Ashley Holen, Sr. Athlete of the Year, scores after a steal in the final seconds of the semifinals to put the Wolves up by four. The Wolves went on to defeat the Mandan Braves 65-61 to advance to the Championship against Century. Watford City fell to Bismarck Century in the finals 74-53 placing second. The Wolves will play March 12-14 in Bismarck at the ND state tournament. (Photo by Kathy Taylor) 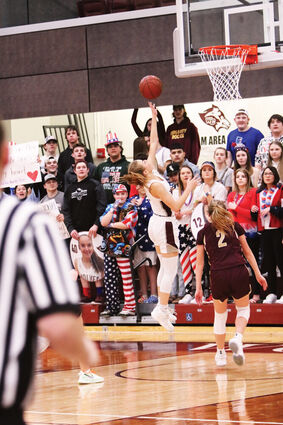 Watford City's Hayley Ogle #1 scores on a breakaway during the quarterfinal game of the WDA Tournament against Minot. After a one point deficit in the first half, the Wolves out scored the Magicians 46-26 in the second half defeating Minot 82-63. In the semifinal game, the Wolves defeated Mandan in a close battle, 65-61 to advance to the championship game against Bismarck Century. The Patriots defeated the Wolves 74-53 for the WDA title. Both teams advance to the state finals in Bismarck along with Jamestown and Bismarck Legacy from the WDA. (Photo by Kathy Taylor)