Cowboys and cowgirls will honor veterans, military and first responders 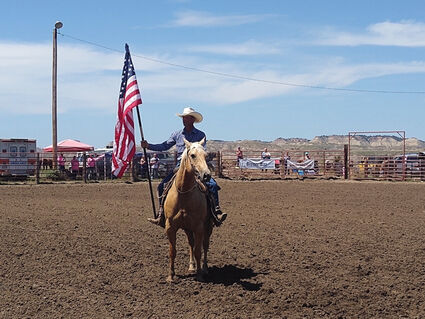 Terry, MT - This year at the 7th annual Eastern Montana Ranch Rodeo Finals, to be held in Terry regional cowboys and cowgirls will honor our servicemen and women and first responders on a day that reminds us all of the price so many have paid for our freedom. On Saturday, Sept. 11, qualifying women's, kids' and open ranch rodeo teams from regular series ranch rodeos across eastern Montana will compete for the season titles. Before the rodeo action starts, contestants and volunteers will take part in a patriotic grand entry to honor veterans, military and first responders. Opening ceremonies will include the presentation of an arena-size American flag and recognition given to all who have served.

Sam Kortum, Eastern Montana Ranch Rodeo Association representative, says, "You definitely want to come for the rodeo action – these are some great teams showcasing the best of our area – but even more than that, you want to come take part in the celebration of our servicemen and women and first responders. This will be an event where we hope everyone present can remember the emotions we felt 20 years ago – the feelings of comradery, duty and patriotism as we watched so many give the ultimate sacrifice."

In a solemn reminder of the current state of our world, a Bradley armored tank from the Montana Army National Guard that was scheduled to take part in the opening ceremonies will not be present. It has been deployed.

The EMRRF ranch rodeo series started in 2014 and includes the communities of Miles City, Terry, Circle, Broadus, Jordan, Wibaux and Ingomar. Each community plays host to a regular season ranch rodeo where the top two teams qualify for the finals. This is the fourth year the finals will be held in Terry. The women's teams will compete in branding, doctoring, rustler's race, and penning. Kids' teams will vie in branding, doctoring, trailer loading and a pony express race. The open teams, which must include at least one woman, will contend in penning, branding, doctoring, rustler's race and wild cow milking. The ranch bronc riding finals will also be held before the open rodeo.

At the finals the EMRRF will also pay tribute to a founding member and dedicated volunteer, Bill Harding, Miles City, who died in a horse accident in May. "Bill was a driving force in getting the association to its present-day stage," says Kortum. "With every word spoken and decision made, Bill always had the betterment of the association at the front of his mind." Harding served as officer and board member since the inception. He competed for many years then shifted to working as a judge and ever-present volunteer.

The Women's and Kids' combined rodeo finals will start at 10 a.m. at Prairie County Fairgrounds, Terry. The Grand Entry will be held at 1 p.m., followed by the calcutta of the open teams at 1:30 p.m., and the Open Ranch Rodeo Finals starting afterward around 2 p.m. Tickets are $10 and kids 12 and under get in free.