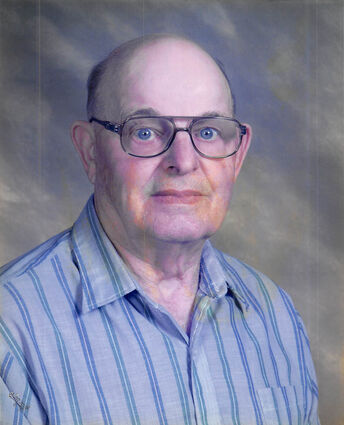 Mass of the Christian Burial for Harold Fink, 97 of Lambert/Sidney, MT is at 10:00 A.M., Monday, December 20, 2021, at the St. Matthew's Catholic Church, Sidney with Father Jim O'Neil as presider. Interment will be in the Richland Memorial Park Cemetery, Sidney, MT under the care of the Fulkerson-Stevenson Funeral Home of Sidney. Visitation will be Sunday, December 19, 2021, from Noon to 5 PM at the funeral home and one hour before mass at the church. Remembrances, condolences and pictures may be shared with the family at http://www.fulkersons.com.

Harold James Fink was the third child born of Roy and Isabella Fink on November 12, 1924 at the family farm. He attended the Bradley and Poleville schools through the 8th grade and graduated from Lambert high school in 1942. He farmed with his father for several years then in the winter of 1947 he attended the Hanson Mechanical trade school at Fargo, North Dakota learning auto mechanics and working the lathe, graduating in the spring of 1948.

Harold entered the US Army in 1948 at Fort Ord, California. He was the light weapons infantry squad leader and earned the rank of Corporal of the 23rd infantry battalion 2nd division at Ft. Lewis in Washington. In January of 1950 he was separated and relieved of active duty and transferred to enlisted reserve in the ERC artillery. He was recalled to active duty October of 1950 and served in the Army of occupation in Japan, during the Korean War, for ten months as a gunner and tractor operator in the 37th Gun Battalion, 6th Army division. He was discharged in November 1951 from active service and from the enlisted reserve October 1952. Harold then began farming on his own in 1952 on a rented farm.

In May of 1954 he married Helen Brown. To this union 6 children were born, Linda, Dennis, Alan, Phil, Briant and Ron. They lived and farmed on the Dombrowski place until 1962, when they moved to his uncle (Lawrence Fink's) farm, which they later purchased. Harold enjoyed restoring old tractors, engines, cars and fishing. He was also a part of the Lambert Museum and participated in many parades throughout the years. He served on various boards and committees for over 47 years which included Farmers Union Grain Co., board member of Spring Lake School, ASC committee, and church council of St. Teresa's Catholic Church in Lambert. He was a life member of Knights of Columbus, and was a member of the NE Threshers Assoc. He was a Richland Co. commissioner from 1977 to 1982. Harold farmed north of Lambert from 1946 until 1989; they then retired and moved to Sidney. After 51 years of marriage, Helen passed away Dec. 11, 2005. Harold entered the Lodge in 2014 and later moved over to extended care in 2019.

Dad was preceded in death by; his wife, Helen; his parents; his sisters, Christine, Muriel, Margaret and Mary, and his brothers, John, Paul, William and Bob.