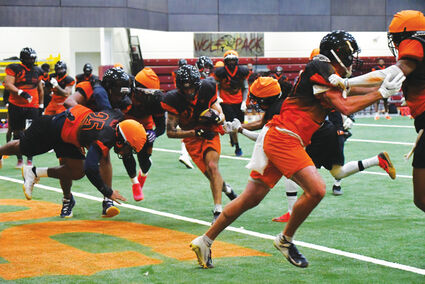 Bucks wide receiver Alexis Rosario runs in for a touchdown during the scrimmage Friday night.

The Bucks have held their camp at the Rough Rider Center for the past two years and intend to return next year. The team has been grateful for the hospitality they have seen while practicing here. "We love being here. We appreciate all the support we have gotten," said Bucks VP of Operations Heidi Ripplinger. 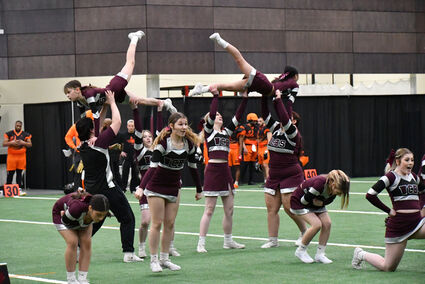 In addition to the scrimmage on March 4, the team held games for kids and adults. The Watford City High School cheerleaders performed at the end of each quarter as well.

Another one of the highlights of the training camp for the community is the kid's football training camp. Bucks players and coaches helped teach the fundamentals of football to 175 kids from Watford City, Sidney, Alexander and surrounding areas on Feb. 27.

The Bucks were established in 2016 and began playing in the IFL in 2017. Last year, the team made it to the playoffs. Unfortunately their season ended after loosing to IFL champions Massachusetts Pirates.