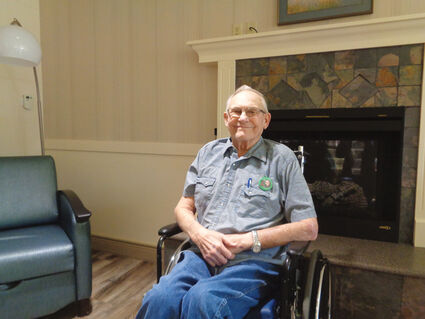 Every year since 1946 on the 3rd weekend of July the people of Fairview, have come together to reminisce and honor the people who have made a difference in the community. This year, Larry Bieber gets his face on the Fairview Old Timer's Festival button.

Bieber was born at his parent's home in Fairview. He attended Nohly School and Central School but left at age 16 to go to work but that did not stop his education. He took an electrical course from a technical school in 1968 and got his GED in 1972 and even got his private pilot's license in 1982. He married his wife, Carol, in 1957 and they raised three children together and, over time, their family grew to include six grandchildren and five great-grandchildren. He worked at many places around Fairview and Sidney. He had moved to Broadview and Billings with his job but, in 1974, moved back to Fairview for good. He became a master electrician in Montana and North Dakota and started his own business, "Larry's Service and Repair". He had also served in the National Guard, was on Fairview's City Council for four years, and in the Fairview Volunteer Fire Department for 13 years, three of them as fire chief. He also served on the airport board, church board, and senior housing board. His son, Brian, said, "Larry worked very hard all his life but would always find time for friends and most of all his family." Larry is looking forward to the Old Timer's Festival.

Every year the honoree for the festival is chosen by the festival's board members. The button will be sold before and during the Fairview Old Timer's Festival at businesses in Fairview such as Neu's Super Valu, Merchants Bank, Cherry's, Water Hole #3, Double Barrel, MonKota, Fairview City Hall, Hotel Albert, Fairview's Loaf and Jug, Pro-Glass, and Powder Keg. The festival will be Friday July 15, Saturday July 16, and Sunday July 17 in Fairview with lots of different contests, a parade, music, food, games, and a Sunday service in the park.

More information about the Fairview Old Timer's Festival can be found on flyers in the businesses selling the buttons and elsewhere around Fairview.