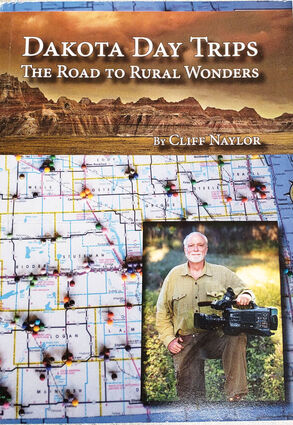 Cliff Naylor, famous for his "Off The Beaten Path" stories on KFYR TV, has published his third book featuring rural treasures in North Dakota, eastern Montana and northern South Dakota. "These are 50 new places, all well worth a trip to," Naylor said. Because it is self-published rather than through the North Dakota Tourism, Naylor was able to include eastern Montana places like the unique little town of Westby, the remarkable Fairview Lift Bridge, and the Dirty Shame Show, Scobey. Although readers cannot visit, he also writes about the Dinosaur Cowboy, Clayton Phipps, who is a rancher with thousands of dinosaur bones on his property. He digs them up and sells them and has one remarkable piece, Dueling Dinosaurs, a couple of complete skeletons engaged in mortal combat, at the North Carolina Museum of Natural Sciences.

North Dakota stories highlight some truly amazing individuals like the man with the coffee cup house, or the one who holds the Guinness World record for the longest beard. Places to visit include the Pembina County Historical Museum in Cavalier which houses a display of Norval Baptie, world record speed skater and the inventor of ice dancing and the very first touring ice show. Take a trip to the first mosque in America in Ross, the Roger Maris Museum, Fargo, or travel the Louis L'Amour Trail in Jamestown. A visit to Fort Buford, Fort Union and the Missouri Yellowstone Confluence Center is always worth the trip, or call Ken Clark in Lidgerwood for an appointment to see his pencil collection which numbers over 43,000. North Dakota actually has a waterfall that you can see at Fort Ransom!

"Dakota Day Trips", The Road to Rural Wonders is available by sending a check for $15 to KFYR-TV, 200 N. 4th St., Bismarck, ND 58501; at Books on Broadway, Williston; Merchants Bank, Fairview; MonDak Heritage Center and the Chamber of Commerce, Sidney; and at Barnes & Noble. Naylor said sales have been going well. When he published the book, he didn't anticipate that gas would be $5 per gallon, but this book has given travelers some great local options. "I'm happy to share these sites with other people who haven't been paid to go see them," he said with a chuckle.

Naylor said he started the "Off the Beaten Path" stories by accident. As a photographer for KFYR, the self-proclaimed city boy ended up in rural North Dakota taking pictures. While on assignment, he saw and heard some interesting things and asked why no one did stories about them. Mostly it was travel costs and time. He started doing some of those stories on his own time and the segment became so popular that he was asked to do one per week, with two days to do it, an unheard of offer he said. His first fear was whether there were enough interesting things in North Dakota to warrant a weekly story. His fears were unfounded. He has done hundreds of stories since then and is still finding unique places, people and events to talk, and write about. Naylor has seen even more back roads than anticipated. He shared that he gets lost, a lot, and always scheduled an extra hour of slack time, knowing that he would end up at some farmer's door, asking directions.

The first two Dakota Day Trips books, published in 1999, 2001 and 2016, were products of the North Dakota Tourism as a way to encourage travelers to visit the small towns in North Dakota and discover things about the state that people didn't know were there. It was a great boost for those small towns, with visitors stopping for meals, gas, or maybe an overnight stay. "I was happy to share what those places have," Naylor stated. "It has been very gratifying." Driving the back roads, seeing unique places is the "best job in the world."

Pick up your copy of "Dakota Day Trips, The Road to Rural Wonders" and make plans to visit some of those unique local places and activities while gaining valuable insight into the people and places that make North Dakota and its neighbors such great places to live and visit.