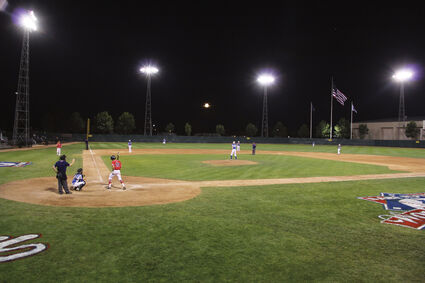 The 14-year-old Babe Ruth World Series will be in Williston at Ardean Aafedt Stadium Aug. 12-20.

Starting out on Aug. 12 there will be a manager and coach breakfast, a walk-through of Aafedt Stadium, and an icebreaker picnic at the ARC. A skills competition at the stadium wll be held At 2 p.m., and Kirk Harold Gibson, former professional baseball player for the Dodgers, will speak at the Banquet of Champions at 6 p.m. in the Williston State College Gym. The opening ceremony with Lee Greenwood singing the national anthem Aug. 13 at 10 a.m. followed by the first four games of the series. Lee Greenwood will have a concert at 10 p.m. and TNT Fireworks will hold a fireworks show at 10:30 p.m Each team will have four more games. Aug.14-17. A drone light show afterward on Aug.14 and dueling pianos at the Raymond Center on Aug. 16. There will be two quarter final games on Aug.18 and two semifinals on Aug. 19. An airshow at Williston Basin International Airport will be held on Aug. 20 at 9 a.m. The championship game will be at 1 p.m. and the closing ceremonies will be at 3 p.m.

According to its official website, http://www.baberuthleague.org, Babe Ruth League, Inc., is a non-profit, educational organization, named after one of the greatest baseball players of all time. A tournament team from each chartered local league enters its district tournament. District winners advance to statewide competition, with the successful team qualifying for one of eight regional tournaments. The eight regional champions from across the United States and Canada compete in each World Series. The Babe Ruth League, Inc. programs above all, are of, by, and for youth. Its mission is to make better citizens through proper supervision of regulation competitive baseball and softball in addition to promoting mental and physical development. In adopting rules, establishing standards and in all planning, the primary consideration is what is best for the participants.

The Ardean Aafedt Stadium is regarded as one of the finest amateur baseball facilities in the United States. Built in the early 1950s, the stadium has hosted numerous district, state, regional and national tournaments in both Babe Ruth Baseball and American Legion Baseball. The Williston Boys Baseball Committee, Williston Parks & Recreation District, and the City of Williston previously hosted the 1980, 2003, 2013, and 2016 Babe Ruth World Series at Aafedt Stadium.