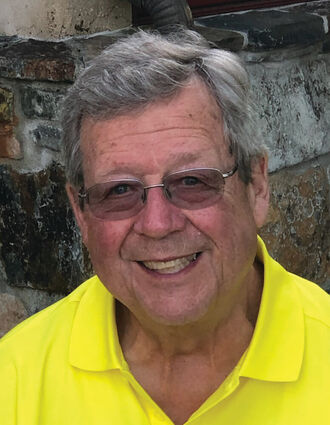 Funeral services for John L. Olson, 83 of Sidney are at 2:00 P.M., Sunday, August 28, 2022, at the Pella Lutheran Church, Sidney, MT with Pastor Alton Hillesland officiating. Visitation will be Sunday, August 28, 2022, from 10 AM to Noon at the funeral home and one hour before service at the church. Fulkerson-Stevenson Funeral Home of Sidney is caring for the family. Remembrances, condolences, and pictures may be shared with the family at http://www.fulkersons.com. In lieu of flowers, memorials can be made to the Foundation for Community Care, Pella Lutheran Church, or charity of one's choice.

Montana's biggest cheerleader, John L. Olson, age 83, died Monday, August 22, 2022, peacefully, in his sleep. (The same day as Pepsi-Cola celebrated its 124th birthday!) John was a loving husband, father, grandfather, and friend. His titles were many: A Pepsi-Cola Bottler and businessman, a passionate philanthropist, member and chair of various charitable and corporate boards, and a former teacher and coach. He was the most enthusiastic cheerleader for whatever organization he was involved. He will be remembered for his love of the state of Montana, the University of Montana and his beloved Grizzlies, his love of Eastern Montana, Flathead Lake, Glacier Park, Big Sky, and the Black Hills of South Dakota... and his desire to ride his mountain bike.

John was fun-loving, had a great sense of humor and was a prankster of epic proportions. His love of music was legendary. He learned to play the trombone as a young boy and formed dance bands in high school and college, which also paid for his education. His love of music was catapulted by a Great Falls school band trip to New York City, where he got to watch his favorite Yankees. He considered collecting records, cassette tapes, DVDs, music CDs and business cards as his hobbies.

John was born August 5, 1939, in Havre, Montana, son of Everett William "Happy" Olson and Dorothy Mildred Edwards Olson. He was an only child, and his mother was divorced shortly after he was born. During World War II and other difficult economic times, he was raised by the nuns at St. Thomas Orphanage in Great Falls, MT. When economic times improved, he returned to live with his mother. In an effort to meet his father, whom he hadn't seen since he was two months old, he hitchhiked from Great Falls to Wells, MN at the age of 15. He met his dad and would later bring him back to Montana to meet his first grandchild and reunite with John's mother.

John attended schools in Great Falls and graduated from Great Falls High School in 1957. He served in the United States Marine Corps Reserve and later earned his BA degree from the University of Montana at Missoula in 1962. Following college, he taught high school students at Hysham, Montana and was an assistant coach for football and basketball. He was known to make basketball players hang from the monkey bars in hopes that they would stretch out and get taller.

On April 17, 1966, John married the love of his life, Marilyn Louise Johnson, a public health nurse and a graduate of Montana State University from Big Timber, Montana. (Proof that Bobcats and Grizzlies can get along!) John and Marilyn later became proud parents of Karen and Randy.

John's formal career with the Pepsi-Cola Company began with managing a sales center in Casper, Wyoming. He then served as a sales development representative for eleven western states, including Hawaii and Alaska. He purchased the Pepsi-Cola Bottling Company of Fairview and Sidney, Montana from his uncle and partner in 1966.

In 1970 John and a group of Pepsi-Cola bottlers in Wyoming and Montana joined together to form a canning production cooperative that he named Admiral Beverage Corporation. John was elected as Chairman of the Board and served in that capacity for 51 years.

John was a founder and the first chairman of the First United Bank of Sidney, now known as Yellowstone Bank. He also helped to establish Sidney's Foundation for Community Care in 1983 and served as its board chair for several years before retiring in 2001.

John was humbled with numerous accolades and lifetime achievement awards for his leadership, vision, and philanthropy for his alma mater (Go Griz!), the Pepsi, MillerCoors and beverage industry and his communities at large. He especially loved his loyal employees and was proud to create a scholarship fund for their children's education.

Above all, John left his family a legacy of love for God and family, an appreciation for music and sports, a passion for history, and a commitment to his community... And, of course, to never take life too seriously. He would always say, "you just don't see someone in a bad mood when they're drinking a Pepsi!"

In lieu of flowers, memorials can be made to the Foundation for Community Care, Pella Lutheran Church, or charity of one's choice.

John (also known as "Uncle John" and "Otis T. Yeveschewski, Sr.") was preceded in death by his parents, and his beloved in-laws, Rev. Ocee and Inga Johnson.