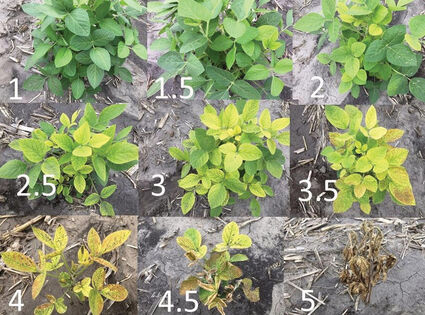 "If farmers had IDC in their fields this year, they should consider using the NDSU tolerance ratings generated in 2022 and previous years, to select soybean varieties for 2023, to minimize the chlorosis in their fields," says Hans Kandel, NDSU Extension agronomist.

The test results are based on a replicated trial conducted at a location with a history of IDC. Visual ratings were given, three times during the growing season, at two week intervals and ratings were averaged. The ratings were based on a 1 to 5 scale, with 1 indicating no chlorosis and 5 being the most severe chlorosis.

"Soybean varieties differ genetically in how tolerant they are to IDC symptoms," says Carrie Miranda, NDSU soybean breeder. "The chlorosis expression differs from field to field and this year our trial location had severe IDC."

"The data generated is intended to compare varieties against each other for the specific conditions this year. The most tolerant varieties will have the lowest IDC rating," Miranda continued.

This summer's tests showed significant differences among soybean varieties. For example, the average ratings for the conventional group of varieties tested, ranged from 2.3 (most tolerant) to 4.4 (the least tolerant variety). The test results are available at https://www.ag.ndsu.edu/varietytrials/soybean.

The IDC symptoms appear as yellowing leaf tissue between the veins while the veins may remain green. In a severely affected plant, the tissue will become brown and tissue may die. Plants with chlorosis are often stunted and growth and development are slow compared to healthy plants. Soybean plants may grow out of the chlorosis and become green again; however, yields are usually reduced due to IDC.

Although IDC tolerance in soybean varieties is important, it is also critical to consider other variety traits and yield. Varieties with similar IDC tolerance can vary greatly in their yield potential.