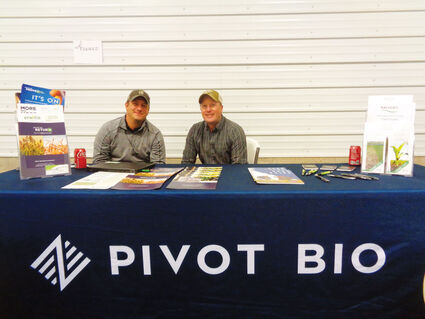 Pictured from left, Michael Schaefer of Nuseed and Dan Story of Pivot Bio took the opportunity of having booths in close proximity to network while at the Gold Standard Seed Open House. (Photo by Jaymi Mozeak)

Bob Gannaway, Buckshot Seeds, and Mark Erickson were proud to have their open house for their Gold Standard Seed distributorship's new warehouse on Friday, Oct. 28. 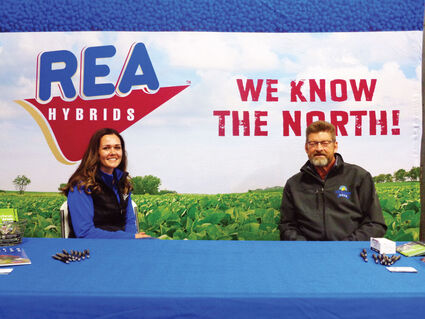 Neither man is new to the area of seed sales. Gannaway and his wife, Teri, have served eastern Montana and western North Dakota through their business, Buckshot Seeds for 23 years with storefronts in Fairview, Glasgow, Wolf Point, and Sidney. He is a retired farmer, yet still keeps a few head of cattle. Erickson is the former district sales manager for REA Hybrids for the MonDak area. As a result, Gannaway and Erickson have had a long working relationship for about 20 years. When Gannaway decided he wanted to retire and enter into a distributorship it was only natural that he offered Erickson the opportunity to go in with him on it. Gannaway said, "Erickson's well-known and a good salesman." Erickson was thrilled with the opportunity. He said, "I'm not a fan of the big corporate structure. As district sales manager I felt I was getting too far from the customers. I like the networking that can happen when you speak to the customer face to face." He was already working with the people of the area and wanted to continue.

Gannaway, his wife Teri, Erickson, and his wife Sue started their Gold Standard Seed distributorship in 2021 but did not have much storage. They have still been able to serve customers throughout Montana because of it. Erickson said, "Montana is a sleeping giant, agriculturally, and there is a lot of potential here." When the old Hefty building on Hwy 16, south of Sidney became available they sprang on it. Gannaway is excited to have the warehouse and said, "I think the building will serve the area well when planting time comes around." For more information on their business and products, Bob "Buckshot" Gannaway can be reached at 701-570-1114 and Mark Erickson can be reached at 701-440-1621.