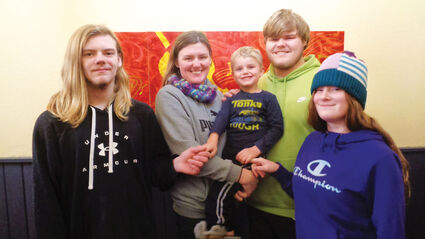 Autumn Jorstad, inner left, was finally able to get her youngest son, Taylem Berry, center, reunited with the rest of his family. His brothers Nicholas, far left, and Michael, inner right, and his sister, Rebecca Ann Jorstad, far right, were all excited to finally see him on Sunday, Dec 4, a full 56 days after he was abducted in October. (Photo by Jaymi Mozeak)

At 3 pm, Tuesday, Nov. 29, a message waited for by concerned citizens across the country was posted on Facebook by Sidney Police Department. "Taylem Berry has been located and is safe."

For 52 days posts were spread across multiple social media platforms, videos were put on YouTube and TikTok, and an interview was done on the radio. All to find Taylem and bring him home. Taylem and his father, Raymond Berry were found on a ranch in rural Mariposa County, CA, where Raymond was working and they were staying. Taylem's mother, Autumn, and a friend drove to Mariposa, CA on Nov. 29, an almost-1,500 mile trip, and she was finally reunited with her youngest child. Raymond Berry was arrested for his crimes. Autumn expects to have to go to court to finally get a parenting plan.

An Amber Alert was not put into effect for Taylem for reasons beyond law enforcement's control. According to a release posted to Facebook by Police Chief Mark Kraft, Sidney Police Department, "The AMBER Alert program has a very specific criteria that must be met in order to issue an alert, and those requirements were not met in this case. The AMBER Alert system is not used to track runaways, missing children, or children involved in custody disputes. In this matter, Raymond Berry and Taylem's mother both share legal custody of Taylem, and a parenting plan or court-ordered custody arrangement had not been in effect." Even though Raymond had threatened to take Taylem many times before, Chief Kraft said, "There is not much that law enforcement can do in these situations where both parents have legal custody and no parenting plan exists unless very specific criteria have been met, such as in this case. I strongly urge anyone who may be in a similar situation to obtain legal counsel and establish a parenting plan through the courts as soon as possible. Once a parenting plan is in place it is much easier to go back to the court and ask for modifications of the plan if there are concerns about the other parent and their intentions."

Chief Kraft said in his press release, "Now that the active search for Taylem Berry has come to a successful conclusion, we at the Sidney Police Department would like to express our sincerest gratitude to our community, our law enforcement partners, and everyone who shared information on this case or called in with a tip. Autumn said in a post on Facebook, "I want to thank everyone for everything. I'm so grateful for everyone that prayed, posted, shared, commented, reacted, posted flyers, did TikTok, Instagram, Twitter, looked for Taylem, made phone calls, everything. All the things. I will never be able to thank you all enough."