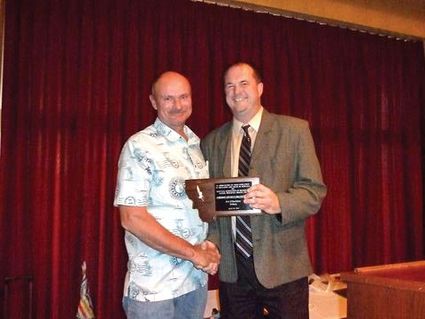 The MASSP (Montana Association of Secondary School Principals) Annual Conference Award Banquet awards Roger Byer of B & B Builders, Sidney, the annual Community Partner in Education Award for the State of Montana in 2012 (sponsored by MASSP).

Roger and Donny are fine examples of self-made men.  They came to Sidney, Montana over thirty years ago with little more than the shirt on their backs and a willingness to work. It was that drive coupled with persistence and solid business acumen on the part of Roger and his brother Donny that created B & B Builders which is arguably one of the most successful contracting businesses in the entire MonDak region.  It was all of that hard work over all those years that caused the Byers to put a value on the importance of an education. Roger and Donny know better than most that it is education that can provide the foundation which may enable students to succeed and prosper. Their perspective on life and living while not totally unique, is genuine and is combined with their willingness to give back and make the world a better place for students, teachers, families and community. Roger and Donny Byer are warm, genuine and caring people and it is not an accolade accorded simply because a check was written, it is who they are.  The Byers’ focus on education is freely given with no expectation of reward or recognition.  The school system in general and West Side Elementary in particular is enriched in many ways because of Roger and Donny’s untiring dedication to the system and the students served by the system.

At the heart of all the benevolence displayed by Roger and Donny is their affinity for students and youth in general.  While many of the things that the Byers have done are most apparent in the school, it is the children who are the inevitable recipients of the Byers’ dedication.  A conversation with Roger and Donny about anything school related will always involve the students, their welfare and how things are going generally.  Should that conversation revolve around problems or some difficulty real or potential they will always ask, “What can we do to help?” These men do not head the other direction when confronted by complicated circumstances.  Roger and Donny’s first reaction will never be ‘how I get out of this’ but instead ‘how can we get involved and make that involvement meaningful.’ 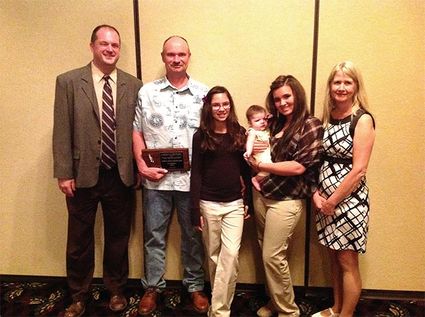 There is probably nowhere that Roger and Donny Byer distinguishesthemselves more than in this area.  Most volunteers and/or involvement come about as a result of the school initiating a project and requesting assistance.  Roger and Donny are at the next level.  These men have not only volunteered when asked, they have taken the initiative and provided the impetus of their own volition.  There are numerous examples of this type of dedication. However, the most apparent is the playground fundraiser which netted over $200,000.00 to provide new equipment for West Side Elementary.  The Byers conceived this project, began the process with a substantial financial donation and then made sure the equipment was ordered and installed.  This would not have happened if not for the leadership and selfless dedication that is a part of Roger and Donny Byer.  It should also be noted that within this process the Byers took a chance.  The school did not order the equipment. Roger and Donny did and had things gone awry, equipment and the responsibility would have gone to them.  This example is only one of many.  When the school has a need Roger and Donny Byer are men who will respond.