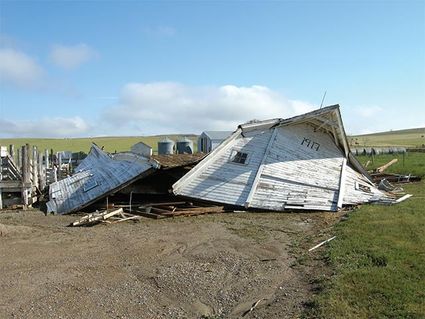 Mother nature cut a wide swath of destruction throughout north west Richland County Monday night, August 5. Damages range from thousands of acres of grain fields that look like summerfallow, and alfalfa fields reduced to sticks, to broken windows and missing roofs and bales. 47 power poles were snapped and lines down, causing power outages in a 4-5 mile area. With 24 Lower Yellowstone REA employees working on restoration, most homes had power quickly, and the last two were back on line within 32 hours.

Timber Creek Ranch in the Andes community, owned by Dick and Connie Iversen and Petersons, sustained massive structural damage. Connie said radar showed the storm basically missing them, but neighbor Ray Franz who was also watching, said the storm took an abrupt 90 degree turn to the north. Every building was damaged except the chicken coop. They also lost miles of fence, and cattle were scattered. Fortunately, only a couple of animals were injured and they should recover. Bales were on end in the trees, and debris littered the ground for hundreds of yards in any direction.

A historic landmark was also destroyed in the storm. The beautiful big white barn at Timber Creek Ranch was completely destroyed. Built in 1917 by a Norwegian immigrant for Andrew Peterson, Sr., the barn was still in use.

A portion of the roof of Iverson’s house was torn off, and wet insulation blown far back into the house. The kitchen, master bedroom and bath have the most visible damage, however, it’s unknown how much damage is being caused by the wet insulation. Jerry Foss, who built the home, also recommended removing all the brick front of the house, due to water behind it. A kitchen window was broken, and water was leaking through most of the light fixtures throughout the house. Ceilings, floors and walls are starting to buckle. More rain on Tuesday did not help the problems. An insurance adjuster was assessing damage Wednesday morning.

Connie credits the roller shades on the outside of most of her windows with protecting them and the contents of the house from further damage. “I would highly recommend them,” she said. “They have saved my windows in the past – a lot.”

The couple is very thankful that they did not lose any belongings. Thanks to friends, family and neighbors, the cows were rounded up and temporary fencing completed quickly. Belongings in the house were rapidly moved to safety, and the roof temporarily tarped to prevent further damage. A steady stream of helpers was still assisting Tuesday and Wednesday, and probably for some time to come. Iversons expressed their deepest gratitude to everyone who has helped in any way.