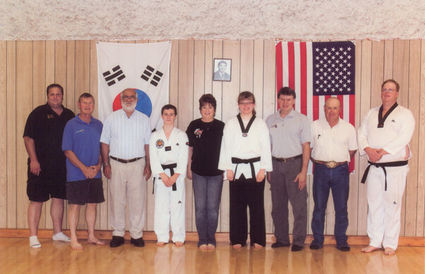 If you ask any student at the Sidney Tendokan Taekwondo dojang the progression of belt colors they can earn by mastering the Korean style of martial arts, they can tell you. It's been that way for the past 30 years and on Feb. 22, together, they will celebrate this accomplishment of longevity with a small tournament, followed by an open house.

The afternoon event will begin at 1:00 p.m. and include some friendly competition with their sister school, Williston Taekwondo and Judo Academy, located in Williston. From 3:00 to 5:00 p.m. there will be cake and refreshments.

"I enjoy watching the students grow. A lot of them get involved in taekwondo because they aren't big enough for football or fast enough to play basketball. It's inspiring when after a few years of martial arts, they grow into those other sports and excel," said Mike Bergh, owner and instructor.

The dojang opened in 1984 when Paul Speck and his wife Patsy, then of Williston, began coming to Sidney twice a week to offer instruction. Two of their first students were Mike Bergh, who today is a 6th degree black belt and Gary Tescher, a fourth degree black belt. In 1988 when the couple moved to Colorado Bergh took over and kept the doors open. In 1989, they moved the dojang to its current location on North Central Ave. Prior to that, classes were held anywhere they could find a spot large enough for the students to practice.

While the students are taught by Bergh and some assistants, they study under Master Instructor, Jae Ho Park.

Today Bergh has the assistance of David Albrecht, who began as a student at the age of seven, back in 1986. He is a 3rd degree belt. His son, Dylan, 6, also attends the dojang as a green belt. "Taekwondo is a sport that builds good character and self-esteem in youth. It gets them in the mindset of following directions and provides them with an outlet for their energy," Albrecht said.

"Over the years people have asked me why I haven't gone to a larger city to teach the sport. I like the small town atmosphere and I enjoy having the independence to teach the way I want to," Bergh said. Bergh is originally from Kindred, N.D, and began his instructions there under Moo Yung Yun, in 1978 in Fargo.

He teaches his students that marital arts are about much more than fighting. They are about learning how to defend yourself while building self-esteem and confidence. "Sometimes just having the knowledge to defend yourself is what keeps you from fighting. Bullies don't pick on people they know are going to hit them back. I've had students defend themselves and say they were afraid to tell me because they thought I would be mad, so I had to clarify my beliefs that sometimes it comes to that," he said.

Berg started taekwondo at the age of 16 when he was in high school as a way to stay active after he graduated. "I had always been told taekwondo was a sport you could do forever in order to keep getting exercise on some kind of level," he recalled.

"I love the dynamic of teaching both boys and girls and watching them work together. It's funny because there aren't many girls who are intimidated by the boys and there aren't many boys who haven't been hit pretty hard by the girls," he joked.

The dojang currently has about 40 students, eight of which are black belts. Most new students begin classes the beginning of the school year and following Christmas vacation.