Opening of a Crow Nation Exhibit at the MonDak Heritage Center 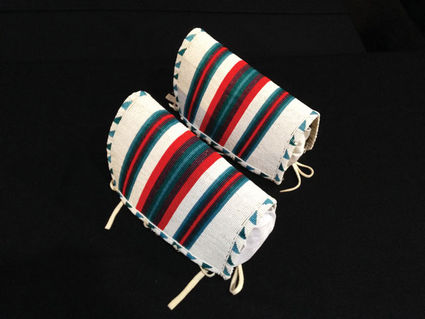 The Western Heritage Center and American Indian Tribal Histories Project exhibit about Crow Indian history and culture, Parading Through History: The Apsaalooke Nation, will be featured at the MonDak Heritage Center now through May 31st.

This unique exhibit was developed, designed, and created by a team of Crow Indian scholars and artists with the intent of sharing the many traditions of the Crow Nation. The exhibit features an introductory kiosk, a Crow language touch screen, fifteen large banners with historical and contemporary comments about the Crow Nation, and several examples of beautiful beadwork from Crow artists. The exhibit was developed as part of the American Indian Tribal Histories Project, a Western Heritage Center program based in Billings, which recorded oral histories, developed a series of educational DVDs, and created exhibits, all from a Native American point of view.

In developing this exhibit, Mardell Plainfeather, a Crow oral historian, hoped visitors would, "gain an understanding for a people who have lived on this continent long before anyone 'discovered' us and our lands." Plainfeather states, "It is a peek into hundreds of years of history, where we've selected symbolic people and images to represent certain periods of time." The title, Parading Through History, was borrowed from Frederick Hoxie's book of the same name, which gives a Crow perspective based on continual movement and cultural pride, both being features of a parade, and adopted as a working theme for the exhibit by the Crow research team at the Western Heritage Center in Billings.

The MonDak Heritage Center is located at 120 3rd Ave. SE, in Sidney and has FREE admission. We hope to see you soon. We are open Tuesday – Friday 10am-4pm, and Saturdays 1pm-4pm.