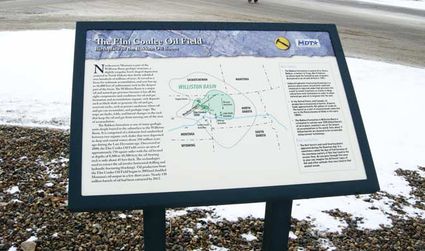 In 2006, Montana's First lady Nancy Schweitzer began the Montana Department of Transportation Geological Roadsign program. That program came to an end a few years ago, but has since been reestablished by first lady Lisa Bullock and Lt. Gov. Angela McLean. The program was designed to educate people on the geological wonders and colorful history of Montana through roadside markers which depict stories through geology.

Since 2006, First Lady Nancy Schweitzer and the Montana Department of Transportation have installed nearly 50 roadside geological markers. Each illustrative sign describes the geologic and paleontological wonders of the Treasure State to help share Montana's unique story.

In September 2014 the Sidney Area Chamber of Commerce & Agriculture announced that Sidney had been selected as the recipient of Montana's newest Geological Marker. Entitled "The Elm Coulee Oil Field: Birthplace of the Bakken Oil Boom." The geo-marker was placed in front of the Sidney Chamber of Commerce building at 909 South Central Ave. in Sidney. Sidney Mayor Rick Norby and Director of Montana Department of Transportation, Mike Tooley were present for the geo-marker presentation by Lt. Governor Angela McLean.

The geo-marker explains the significance of the Williston Basin geologic structure, a "slightly irregular, bowl-shaped depression centered in North Dakota that slowly subsided over hundreds of millions of years. It served as a locus for sediment accumulation, and now has up to 16,000 feet of sedimentary rock in the deepest part of the basin." Within this basin lies the Elm Coulee Oil Field. The Elm Coulee was discovered in 2000, began oil production in 2001 and doubled Montana's oil production within a few years. It is said to be Bakken's richest oil field, covering approximately 750 square miles and expected to produce over 270 million barrels. Nearly 150 million barrels of oil had been extracted by 2013 from the Elm Coulee.

The geo-marker lists the following Geo-facts:

The Bakken Formation is named after Henry Bakken, a farmer in Tioga, North Dakota on whose land the formation was originally discovered in an oil well drilled in 1951.

Induced hydraulic fracturing (fracking) is a process where water mixed with sand and chemicals is injected under high pressure into a well to create fractures or cracks in deep, subsurface rock formations in order to allow natural gas and oil to migrate into the well.

In the United States and Canada, oil production is measured in barrels. A barrel holds approximately 42 gallons of crude oil. The barrel as a unit of measurement came into use in the Pennsylvania oil fields in the early 1860s.

The Bakken Formation in Williston Basin is estimated to contain over 500 billion barrels of oil in place, making it one of the largest oil accumulations in the world. Only about 7 billion barrels are deemed to be recoverable using current technology.

If you'd like to learn more about Montana's historic past through geology, stop by a Montana visitor center, chamber of commerce or government agency office and pick up the Montana's Roadside Geology brochure. The brochure is also available online at http://www.mdt.mt.gov/travinfo/geomarkers.shtml.