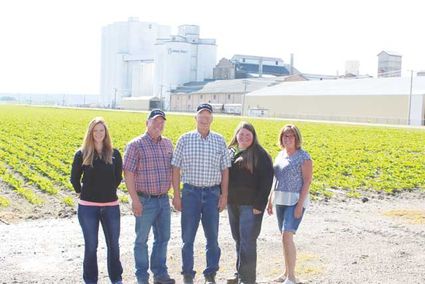 The phone still rings at Sidney Sugars agricultural department from people asking to talk with Russ Fullmer or Randy Jones or Kerry Rasmussen or even Larry Riggs. But instead those calls are answered by younger voices who wish to maintain the office's strong reputation.

"We want to continue the tradition this department has," Duane Peters, who took over as Agriculture Manager in late 2015, said. "Russ Fullmer's experience was second to none."

Pooch, who has been working at Sidney Sugars for six years, covers the factory district, Culbertson and tare lab operations. Erickson, with four years' experience at Sidney Sugars, has the Savage, Glendive and Terry areas. Cayko, nearing her first-year anniversary at the company, covers Sugar Valley which includes Fairview, Dore, Snowden, Buford and Trenton areas.

Cheryl Riedel, meanwhile, serves as Ag/Financial accountant in the office. She has more than 21 years of experience with the company, but only two of those years have been in the agricultural office.

"I needed a change from payroll," Riedel explained. "It's definitely less stress being in Ag. I'm a farm girl, was raised on a beet farm, so this job has taken me back to my roots."

The agriculturists said they enjoy the variety that their positions offer. Cayko explains one day they might be in the office finishing paper work and the next day they might be walking in the field with growers.

"No day is ever the same," Erickson noted.

"There's nothing better than seeing a beautiful crop," Pooch said.

Peters added, "There's nothing more disheartening than seeing a field after a hailstorm."

Peters said that it's challenging to figure out what's wrong with a field and it's a joy to experience the different personalities and styles of area growers.

"For the most part, growers are really good to work with," Pooch said. "Everybody loses their patience sometime."

Riedel explains that agriculturists during harvest are dealing with farmers who are working with little sleep and have a lot of tension. "That's not a good combination."

Other offerings for area growers include the MSU field day in Sidney on June 30, a Cercospora workshop on July 14 and variety strip trial tours on Aug. 11

The strip trial tours will feature a meal organized by Riedel featuring local products such as brats from Craig's Meats and sweet corn grown from the area along, of course, with baked goods containing sugar.

Peters thanks mechanics Brent Coon and Ken Buckles for also being key members of the agricultural staff.

While Pooch and Erickson are fairly established in their districts, Cayko keeps making new, good relationships. "We're still working on it," she said, while mentioning her last name helps. "It's nice that I don't seem like a random outsider."

One change is the agriculturists spend time in other districts' fields once a month. That way each of them becomes more diversified.

Although Pooch was Sidney Sugars' first female agriculturist, some women have more than 20 years of experience in the field. Now, two of Sidney's three are female.

"Women are more and more active in agriculture," Pooch said. "I grew up on the farm, it's in my blood."

She said one grower had some concerns about Pooch, until she helped him in the field one day. "I just showed that I was willing to do hard work."

Cayko added some people are surprised that she isn't willing to sit behind a desk all day, but she is working out in the fields.

Peters explains the staff does become somewhat competitive when announcements such as top 10 growers or largest sugar beets are made. "Everybody is proud of their areas," Peters said.

Wagers are sometimes made such as the winner receives a free breakfast.

Erickson said about the competitions, "It's a friendly..." before being interrupted by Cayko, "It's not friendly."

But the competion brings out their best work, plus it's a stress reliever during the tensions of harvest.

Erickson laughed, "He left with a record year."

"These guys go walking on piles all winter. We are always walking the piles and maintaining the rehauls," Peters said. "We are always looking at what we can do better."