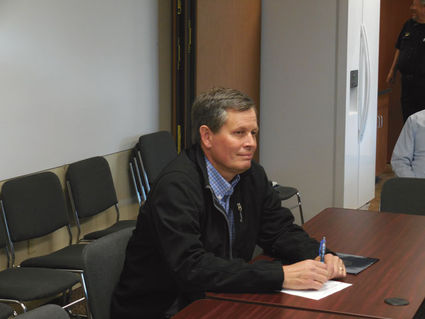 Senator Steve Daines was in Sidney Oct. 5th; he met with local beet growers at Sidney Sugars, toured the Intake Lower Yellowstone Irrigation Project Diversion Dam, and held a roundtable discussion focused on the needs of law enforcement, specifically the continuing drug issues in the Bakken region, as well as the need for the temporary Federal Bureau of Investigation (FBI) agent presence in Sidney to be made permanent. Federal, state, county and local law enforcement agencies were in attendance.

Members and leaders of the community were invited to the open session of the discussion.

Sheriff John Dynneson, the County Attorney's Office, County Commissioners, and Mayor Rick Norby were just a few of those in agreement about the continued need for FBI presence in Sidney and Richland County.

"In many ways things are slowing down, but crime is not," commented Mayor Norby.

According to the Montana Board of Crime Control's Crime in Montana: 2013-2014 reports, Richland County has had 125 times the number of offenses in 2014 than it did in 2009. Sidney has also become a potential control point for drugs being trafficked into and out of the state. Having a federal presence in Richland County has been useful to local law enforcement in many ways, and has allowed federal crimes to be addressed without seeking the assistance from agents hundreds of miles away.

The temporary duty station is scheduled to end in July of 2017, and Senator Daines is taking an active interest in seeing it continue on a permanent basis. He has reached out to the Director of the FBI, James B. Comey on more than one occasion to impress upon him the importance of federal agents in Richland County.

While there is a permanent field office in Williston, ND, it serves a different judicial district, and agents across the state line are dealing with crime in that area.

"We believe strongly in having a physical presence in Sidney and we want to be an ally and a resource," said Senator Daines. "To the police, deputies, FBI, and Border Patrol, thank you for what you do. I want you to know that you have a strong supporter in in the state of Montana as well as in Washington D.C."