Rob Quist Campaigns in Glendive May 18 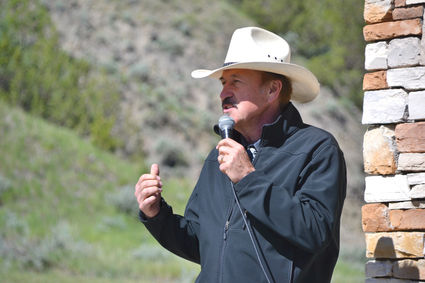 Rob Quist speaks to a croud of supporters at Makoshika Park.

Democratic nominee for US House of Representatives Rob Quist gave a speech in Glendive at the Makoshika Park Visitors Center on Thursday, May 18th. The speech was a part of the Hands Off Our Health Care Tour, a Quist effort that on the same day went to the Wolf Point Community Center at and Loaded Toad Coffee in Glasgow.

While not limited to health care, as Quist took opportunities to reiterate his platform and address statements made by his opponent, Republican nominee Greg Gianforte, the state of health care in the nation was at the forefront. Quist however first began by telling an anecdotal story from his high school days in Glendive. "Glendive will always be one of my favorite cities," said Quist after telling the story. He then began to address some of the issues he has been facing down in the election. "People ask me, 'why in the world would you want to get into the down and dirty world of politics?' And I'm just finding out how down and dirty it is."

Quist then went on addressing some of his opponent's points. "Our public lands are really under threat. I feel this is a fight for the soul of Montana...when people like Gianforte see our public lands, they probably think, 'well, that would be good to own, and to fence in, and develop.' But real Montanans would say, 'This is our way of life.'" Quist maintained that the issue of public lands was one with future consequences, "The transfer and eventual sale of our public lands is nothing more than theft against our children," said Quist.

Quist reached the main point of his speech when he addressed the Affordable Care Act (ACA). "There are definite problems with the ACA," said Quist, "but we can't just repeal it and have everybody not covered. I think one of the things we could do would be to lower the cost of pharmaceutical drugs."

The pharmaceutical industry was an important point in Quist's speech, and about his opponent Gianforte in relation to pharmaceutical companies, Quist said, "My opponent has two and a half million dollars of stock in these same companies that are gouging the people of America." Offering solutions to the problem of high-cost prescription drugs, Quist said, "Another way to lower the cost of prescription drugs is reimportation from Canada. If these drugs are good enough for the people of Canada, they are definitely good enough for the people of the United States."

Returning to his opponent, Quist said, "He's brought out Vice President Pence and Trump, Jr., so to me this just makes me realize how worried they are because we have momentum on our side. We started twenty points down and we closed at the single digits here about two and a half weeks ago." Referencing Gianforte's failed bid for governor in 2016, Quist said, "He failed in the last governor's election and now he wants this one - the U.S. House of Congress will not be his consolation prize."

Taking questions from the crowd, he answered one question about his views on gun rights. "Being raised in a ranching and farming community, gun safety is something that you grow up with. Quite frankly, I've got a number of guns that are older than the amount of years Mr. Gianforte has been in Montana. He talks about how I want a national gun registry - that's patently false."

Closing his speech, he gave one last admonition to his supporters. "I just want to encourage you to talk to your friends and neighbors and really make them understand how important this election is. This is a fight for the soul of Montana. I know if we stand together we cannot be denied."