A Tradition of Excellence: 36 Years of Research and Growth at the Swank Farm 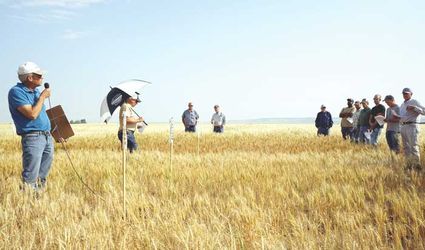 Traditions always have a special reason for their being, but the Swank Variety Plot Tour has several.

On the sprawling Swank Farm north of Poplar, local farmers and leaders in the field of agricultural research gathered to discuss wheat, as well as share some steaks with a side of a special potato salad made from the recipe of the 93 year old Swank Family matriarch, Pearl.

Mark Swank, Pearl's son, was smartly outfitted with an umbrella on the hot, hazy, cloudless afternoon. Despite the lack of precipitation this year, the plot looks better than expected. "They did a good job this year with planting, but we just didn't get the rainfall," Mark said. "If someone told me the crops would have looked like this with no rainfall, I just wouldn't have believed it. They hung on remarkably well."

More than simply a yield variety trial, this year ushered in an exciting newcomer to the science and art of wheat farming. A variety called Lanning caught the attention of many, and the champion supporter was Professor Luther Talbert of Montana State University. But to find out how Lanning came on the scene, it is necessary to know the rather surprising genetic history of this wheat and why it may end up on many Japanese dinner tables.

"So first of all, wheat in general, comes from Iraq," Talbert explained. "Wheat is Middle Eastern, that's where it originated, that's where it came from about 10,000 years ago. Then it spread across the world."

Jumping to present day, the varieties standing in the Swank field are various genetic crosses from Montana and North Dakota wheat. Specifically, varieties called Reeder and Vida stuck out like a green thumb compared to the sea of brown in the test area. Being more drought tolerant and high yield is a very desirable trait this year, but their gluten strength in the past hasn't been what the bakers had liked the best.

While gluten has gotten a bad rap recently, it remains the pride and joy of bakers and millers across the world. "You've seen pizza dough that's sticky and stretchy," Mark stated. "That's the high protein gluten strength. It's also what is desirable about the Spring Wheat raised in this area."

From pizza ovens to Osaka, gluten strength in wheat is highly prized. So the next obvious step would be to make a wheat that the farmers would love for the yield, and the bakers would buy for the quality. This is why an old variety called Glenn failed where Lanning is expected to shine.

"There's a variety called Glenn, from North Dakota," Talbert noted. "All these people that use our wheat to make bread are just poetic about Glenn. About what a wonderful quality it was, what a beautiful loaf of bread it made... They still talk about how great things were when everyone grew Glenn. But the yield wasn't very high."

This is where the MSU breeding program steps in. A successful new variety can make everyone more happy, and more profitable. "In Bozeman we selected among many hundreds, thousands, of lines for the one which we thought combined the best characteristics of the yield of Vida and Reeder," Talbert noted. "With this stronger gluten, we're hoping the Asian Market will notice this uptick in the strength of Spring Wheat. It all depends how popular Lanning is, but I'm hoping it becomes a significant part of the market and pushes gluten strength back up a bit."

Even though the yield and quality of Lanning has yet to be tested, it has people like Mark excited about future potential. "If it's got the quality of Glenn with the yielding of Reeder and Vida, I'm watching it," Mark said. "It's just been named this year."

Farmers were already asking how soon the seed could be in their hands but Lois Weber, Mark's sister, knows the harsh reality of the timetable. "Realistically, five years from now it might come into the elevators," Weber said. "It has already been in the development cycle for many years. It's a long time for turnaround."

Being named is a first, and important, step to getting Lanning into Eastern Montana fields. However, only time will tell if Lanning has the staying power of its' namesake, Susan Lanning, who recently retired from working for Professor Talbert for over 25 years.

One thing which is certainly not going away in the foreseeable future is the Swank Variety Plot Tour. Since the 1980s, it has been firmly entrenched as an event which people look forward to and try not to miss.

Neighbors of the Swank's, Karen and Scott Fleener, continue to attend even though their farming days are over. "It's very social, but I have a degree in Agriculture and this interests me even though we don't farm anymore," Karen said. "There's new things every year. I always learn something new and they have good speakers. So much for dumb farmers. There's a lot to it actually."

From genetics to history, the Swank Variety Plot Tour interlaces modern scientific research with good, old fashioned, community togetherness. Boasting a registration of over 100 interested parties, Roosevelt County Commissioner Gordon Oelkers and other businessmen from the area got busy tending to hefty steaks and massive onion rings after the plot viewing concluded. And, of course, there was the 20 pounds of Pearl's famous potato salad.

The final event of the evening featured a special presentation on Fusarium head blight (FHB) by Dr. Frankie Crutcher of the Eastern Agricultural Research Center in Sidney.

Dr. Crutcher was hand picked by Jeff Chilson, the Roosevelt County Extension Agent because FHB was a big issue for farmers last year. Although it remained an important topic to cover, the drought had clearly stolen the spotlight for headlining the 2017 tour.

This is a prime example of how every year offers different obstacles and triumphs at the same time. During the plot tour, Professor Talbert even alluded to a new study he's seen which promises a bright future for Montana wheat production in the years to come. Farmers may never be able to completely avoid hazards like drought or blight, but this type of research goes a long way to ensuring success for Eastern Montana farms.

The Swank Variety Plot Tour is held every July and made possible by the combined efforts of the Swank Family, Montana State University, Eastern Agricultural Research Center in Sidney, Roosevelt County Extension Office, Culbertson Chamber of Commerce, and many others.