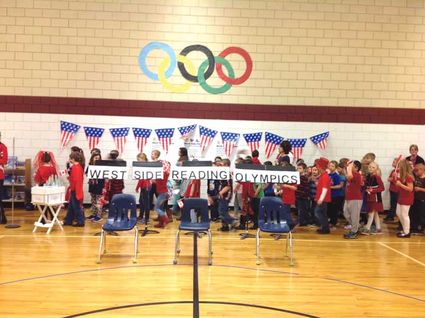 West Side School in Sidney, kicked off its I Love to Read month festivities with Olympic Opening Ceremonies in which classes paraded in and circled the gym carrying flags from many countries. Ethan King, a West Side third grader, came jogging in carrying the Olympic torch. This year the theme is the "West Side Reading Olympics". Prizes were displayed and a lively skit by several teachers illustrated how important reading is, especially to Olympic athletes.

Bob Cost-us-a-Lot (Lynette Farr) interviewed some of the athletes: Maple Reads-a-Lot, an Ice Hockey player (Kayla Vine), and Giovanna Loves-to-Read (Jenny Baker), a medal winning figure skater. Each shared how they became so successful by eating healthy, training hard and reading extensively about their sport. Charles Never-Reads, an unsuccessful snowboarder (Karen Pollari), was coached by the other two about how he, too, could become an award winning athlete by training hard and reading.

The Reading Olympics will go on throughout the month of February. We will have Closing Ceremonies on March 1 with prizes and Olympic medals handed out. 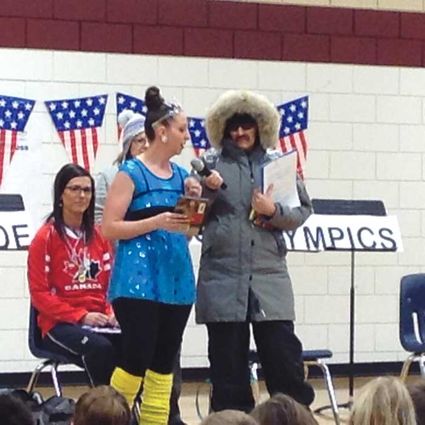