Adzuki and Mung Beans May Open Opportunities For Growers 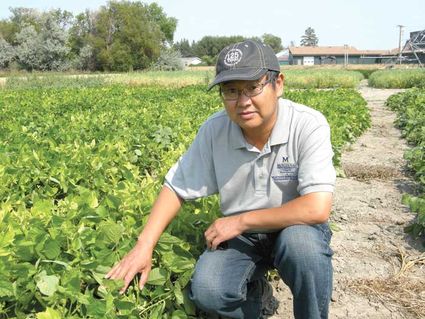 Dr. Chengci Chen Ph.D. showing the adzuki beans that are part of his study and show promise as an alternative to soy in the field.

Soy here, soy there, soy seems to be everywhere. It is in our food, in the food of our pets and livestock, it can be in biofuel, candles, lubricant and even ink. Soy is needed for many products and, since it grows well here in America, farmers are eager to meet the demand. However, this may not be ideal. Chengci Chen, the superintendent of the Eastern Agricultural Research Center of Montana State University just north of Sidney said, "With the popularity of one crop you get market saturation and the price goes down. We don't want to flood the market." Chengci also mentioned that alternating crops keeps the soil healthy and reduces production risk. He is looking into adzuki bean and mung bean as alternative crops. He said, "In Asia, they are very important pulse crops."

The study is still in the early stages. It began last fall in the greenhouse to produce seed. Now they have plants in the field and they are flowered and producing pods. Chengci took me out to see the plants. The adzuki beans were showing some yellowing leaves. Dr. Chen said they think it is from a nutritional deficiency in the soil. The mung beans were all green and appeared healthy. They are expecting both the adzuki and mung beans to be ready for harvest around the same time for soy, early September. Chengci said the study is still in the early research stages but both beans seem promising.

According to Chengci soy, adzuki, and mung bean are all native to Asia but adzuki bean and mung bean fetch a higher price at market than soy. They are high protein, rich in amino acids and not currently being genetically modified.