The Wisness Farm and Ranch 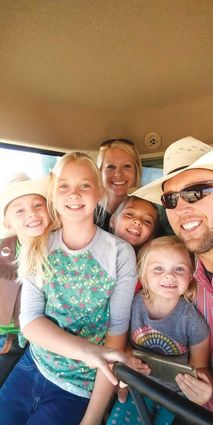 Beau and Heather Wisness with their four kids in the combine.

In 1903 Andrew Wisness staked his claim on a piece of land seven miles north of Keene, North Dakota. He began farming his quarter then passed the farm on to his son Lester.

Now 115 years later, that piece of land has expanded into a large commercial beef cattle and dryland crop operation. The farm has been passed down from generation to generation and is now managed by Lester's son Milo, and Milo's two sons, Beau and Chase Wisness.

Beau Wisness has been farming as an occupation for a little over 11 years. He attended college at South Dakota State University (SDSU) in Brookings, South Dakota. After graduating SDSU with an Agricultural Systems Technology degree, he came back to the farm to carry on the family tradition of farming and ranching.

This year the Wisness farm has had success with no-till farming. "We started switching over to no-till farming, which in the drought side of things has really helped conserve what little moisture the crops do get," explained Beau. No-till farming also helps builds soil structure and health while providing excellent erosion control. Beau has also had success incorporating corn, peas, lentils, and soybeans in crop rotations. He added that it has helped decrease the amount of weeds and plant diseases.

Some of Beau's goals from this past growing season were to increase yields, be as productive as possible, and to try and make it through another possible drought year. "Last year with the lack of rain, we needed to make sure and save enough grass to feed our cows. So this year we tried to game plan and make the right decisions so that we would have enough hay to feed our cows over the winter," said Beau.

Beau enjoys the farming lifestyle. Beau said, "I enjoy the busy hustle and bustle of planning and preparing for different times of the year. I also enjoy the opportunity of getting to spend time with my wife and four children and sharing the farming experience with them." He hopes to continue the family tradition and also to keep passing down the Wisness Farm and Ranch to the next generation and many more to come.