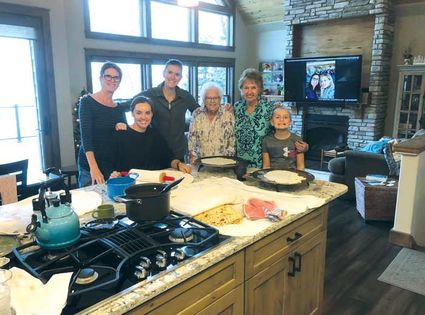 This October 28, just before Halloween, four generations from the James family did something they've done through the years when they can get together. Kathy (Jess) James, her 91-year-old mother Marilyn James, sister Bonnie Guenther and her daughter Kelci Rolfstad, Kathy's niece Jessica Hanna and her daughter Lohgan gathered at Bonnie's lake house and amid much talking and laughter made lefse together.

Even though Marilyn is Norwegian and German, she had never made lefse before she married her husband, Frederick James. When Marilyn married him in 1949 they moved to the James homestead farm and ranch in Alexander, North Dakota. There, she learned how to make lefse from her sisters-in-law and Ladies Aid at the church. She has been making it ever since. While in Alexander, Marilyn would get together with the local women and make it every holiday season. Now that she has moved into the Arbor House assisted living in Williston, North Dakota, she makes it there. This year she also got to make it with family. 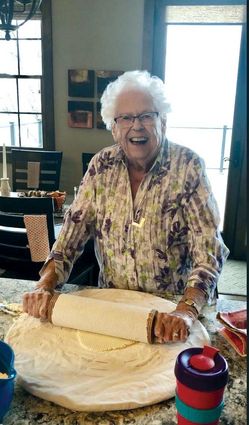 Marilyn James, 91, is the family matriarch and is still enjoying life. (Photo by Kathy James)

Lefse is a popular Norwegian tradition in the MonDak region. Many immigrants from Norway settled in Montana, North Dakota and Minnesota bringing their customs with them. According to the Library of Congress' website, http://www.loc.gov, nearly one million Norwegian immigrants came to the United States between 1820 and 1920. That's the largest percentage of the population of any Scandinavian country. Although lefse is native to Norway the kind we know of here in the states is a fairly recent addition. According to http://www.norwegianamerican.com, potatoes are native to the Andes mountains of South America and did not arrive in Norway until about 1750. Before that, a flatbread was made in Norway and still is. According to http://www.lefsetime.com it was made from wheat flour, was like a cracker and would not go bad for the whole season. The lefse we know in the states is a simple concoction of potatoes, flour, butter, cream or milk, salt, and sugar. The potatoes can be mashed, riced, flour or instant depending on the recipe and is usually cooked on a griddle.

"It was Kelci's idea," Kathy told me. "She's an optometrist in Billings and wanted to make lefse with her grandmother, mom, and extended family." Kathy owns the James Gang Java coffee shop at the Lewis and Clark Trail Museum in Alexander North Dakota. It is open during the summer months.