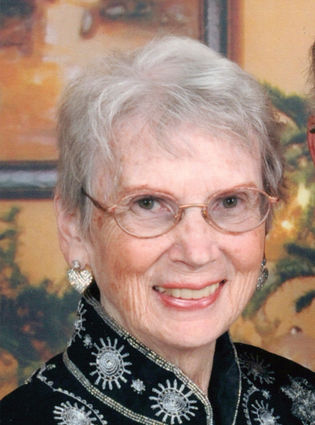 Barbara May Johnson, 84, of Sidney, passed away Wednesday, February 13, 2019 at the Sidney Health Center. She passed peacefully, in her sleep.

Barbara was born August 9, 1934 in Grand Rapids, Mich., to John and Mildred Cooley. Barbara's mother passed away when Barbara was very young and she was adopted and raised by her grandparents, Nettie and Charles Richardson.

She had two siblings, brothers Ernest Ziegler and Verner Richardson. She was raised in and attended schools at Ionia, Mich. She graduated from Ionia High School in 1952.

Following high school she attended Davenport Business School in Grand Rapids. She was working at Sears Roebuck in Grand Rapids where she met the love of her life, Paul T. Johnson. They met on January 31 of 1955, were engaged three weeks later and married on July 2, 1955. The happy couple celebrated their 63 Anniversary in 2018. The marriage produced four children: Kristine, Linda, Eric and Philip.

Barbara enjoyed painting in watercolors, arranging flowers, cooking, entertaining, singing, and traveling with Paul and her family. She was a member of the Sugar Valley Chapter of Sweet Adelines for ten years. She was also a member of P.E.O Chapter W and a longtime member of the Lonsdale United Methodist Church in Sidney. She was active in numerous sororities, including Beta Sigma Phi, NILE and Eastern Star.

Barbara enjoyed many things in life, none greater than spending time with her grandchildren and great-grandchildren, and traveling the world. Barbara and Paul loved Hawaii and traveled there together for more than 30 years.

She was preceded in death by her parents and brothers.

Barbara's funeral service was held at 11 a.m., Monday, February 18 at the People's Congregational Church in Sidney. Fulkerson Stevenson Funeral Home of Sidney was in charge of arrangements. The family asks that memorials be donated to the Foundation for Community Care, or a charity of your choice.